Do you know that Della Reese song, “It’s So Nice To Have a Man Around the House”?  I love it.  Especially the bit that goes:

“…Just a guy in pipe and slippers

And will help you zip your zippers, it’s so nice…” 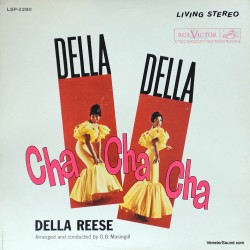 One of the things I really like about my new man is that he’s very handy in the kitchen and mucks in when guests are coming.  Despite the fact that I distinctly remember an early English teacher at school saying you should never use the word NICE when you write, I agree with Della, it’s just nice.

When I’m having a little dinner party I sometimes get in a bit of a tizz.  I can be somewhat bossy (sorry those who are seeking to ban the word bossy) dishing out many tasks, all of which he does brilliantly.  So it was with the stuffed potatoes, which he did all the work for. 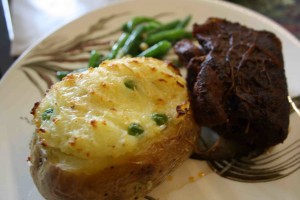 Actually Heather says I can’t call him my “new man” any more, as we have been together for a whole year now.  Call the man from the Guinness Book of Records…  At the risk of making my single readers feel queasy, I must say that I am very happy with the situation, he is very lovely.

To mark one year of loveliness with only one disagreement (about Britney Spears of all things) we went to the floating Chinese Restaurant on Regent’s Canal – Feng Shang Princess – and had Mongolian Venison – yum.

Another thing I like about Mr R is that he likes to mark anniversaries so we have also had a fantastic meal in his local tandoori restaurant (new discovery Tandoori Duck – rrrrrwowww!) to mark a year of “going steady” and a few days later, annual Duckie Day.  This marked the anniversary of the first time he cooked for me.  A juicy ducky wuckie.  Does it surprise you that all these anniversaries revolve around food?  No, me neither.

All of this to say, in a roundabout way, that Mr Rathbone made the potatoes for Doris Day Day, and like him, they were lovely.  Here’s the recipe for these lovely potatoes.  As Mr R put it, they are full of 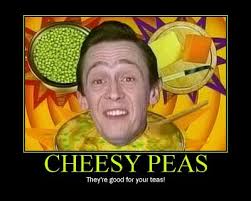 Doris says: “The thing I like about these, besides eating them, is that they can be prepared a day ahead of the feast.”

Wash, dry and grease lightly.  Bake in a 450 degree oven until tender when pricked with a fork.  Remove from oven.  Cut a horizontal slice from the top of each.  Scoop out the insides, being careful not to break the shells.  Mash well

1 package frozen mixed vegetables, or one can peas and carrots drained

Sprinkle on top of potatoes

If the potatoes have been refrigerated, place in a 375 degree oven for 30 minutes before serving.

There are many variations to this, obviously.  Try chives as a topping instead of cheese… or little bits of crisp, crumbled bacon.

MMM. They were really good.  We had them with Doris’s Paprika Steak and it was a good combo…  They went fluffy on the top.  I do fancy the idea of them with a bit of bacon too… 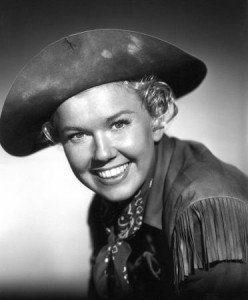