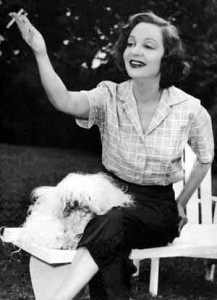 “If I had to live my life again, I’d make the same mistakes, only sooner.”
Last night saw extreme Silver Screen Supperage in action. Dinner al fresco which began with Tallulah’s favourite tipple the French 75. Followed by Adolph Menjou’s Spiced Venetian Cheese hors d’oevres, Errol Flynn’s Baked Fish Havanaise and Joan Blondell’s Peach and Cherry Compote. The first time I’ve attempted such a full-on menu of all-star food. Thank goodness for Ava’s firm assistance in the kitchen and the kind words of my other guests Gladys and John.

Food was devoured, the wine flowed freely and revelations about the double dealings of Delia had us all on the edge of our balcony seats. I needn’t have worried about cooking for a celebrity chef, he was most gracious about my food and said it was all as it should be and “delivered without fluster” which of course, for me was the biggest compliment. I guess that proof that the evening had gone swimmingly was to be found in the fact that there was no time to do a Marion Davies and work on the jigsaw.