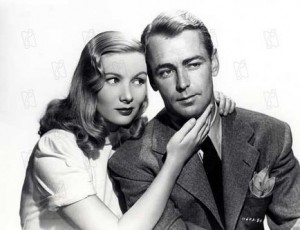 “I just want to make pictures that are entertaining.
I’ll leave the scenery chewing to someone else.“
I wonder if Alan was thinking of someone in particular…

Further to yesterday’s post I’m wondering if some of Alan’s Potato Pancakes would be a suitable accompaniment to Veronica’s Spiced Beef. I’m going to try it. In fact, this may be my first Silver Screen Suppers dinner party when I move into my new abode (this weekend I hope) alongside a screening of “This Gun For Hire” – tagline “Lover without a heart…killer without a conscience!”

Alfred cooked up a batch of these and suggested fancifying them in several ways. He added some grated cheddar cheese and chives to his second batch and suggested other possible tweaks such as wholegrain mustard or chopped anchovies, or even chopped crispy bacon – oh YUM. He also proposed using circular moulds to make the pancakes more celeb-chef style looking, even topping with a poached egg or kipper for a special breakfast. Mmmmmmmm – I want some right now.

He also flagged up something we’ll need to address in the book, Alfred wasn’t sure what shortening was. He isn’t the first either – this is now top of the list of test cook queries, overtaking the confusion over pimientos. In fact, the very first person to volunteer to test cook (our David Niven lookalike) sent me a text after receiving his Errol Flynn’s Baked Fish Havanaise recipe which simply said, “What is pimiento?” That was on the 3rd of August and he hasn’t been heard of since!
Share39
Tweet
Pin
39 Shares