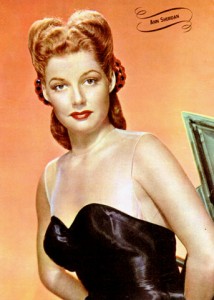 “I can whistle through my fingers, bulldog a steer,
light a fire with two sticks,
shoot a pistol with fair accuracy, set type, and teach school . . ”
Spoken like a true Texan Ann. Reminds me of the multitasking Ruthie gets up to over there in the Lone Star State…

Alfred, the handsome new man in Marilyn M’s life, turns out to be quite a cook. He’s rustled up a couple of dishes as a tester and provided very useful feedback. He made an observation that this recipe comes from an era when people had less adventurous palates. Indeed it is true, this isn’t a HOT chili, as Alfred puts it, “more a kind of chunky pork and tomato soup.”

He suggests serving it with Alan Ladd’s potato pancakes (see yesterday’s post) which makes me wish Ann and Alan had appeared in a film together. It could have been a perfect match of both menu and co-stars. Could you see them together as a couple? I could. As Ginger sometimes puts it, “they have a marriage likeness”.