I had a very vivid dream last night.  It was like a fully formed documentary television programme about people who had record players in their kitchens.  I saw it as a sign that I should move one of my many record playing devices into the room where I spend the vast majority of my time.  Thank GAWD I didn’t give away my red dansette to a man I met earlier in 2012 in a brief moment of romantic whimsey.  It’s on top of the fridge now and dropping 45s on a regular basis.  Time to start building up my non-78rpm collection.  Audio Gold here I come… 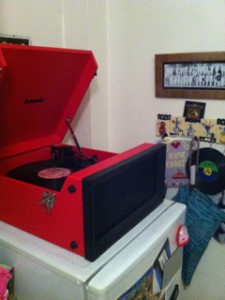 I have spent a whole weekend alone and was in danger of getting melancholy but the installation of a record player in the kitchen fixed that.  The best thing I have done in the whole of 2012.  I spent a very happy couple of hours prancing around to all manner of crazy 45rpms while I made Ann’s Chili and tidied up the place a bit.  I did my best dancing around to Cars by Gary Numan (when I got my first very own record player this was one of the first singles I bought), Swords of a Thousand Men by Tenpole Tudor (reminded me of fabulous times spent in the company of the drummer of said band Gary Long) and S-S-S-Single Bed by Fox.  If anyone can work out the ukulele chords for the latter it would make my day. 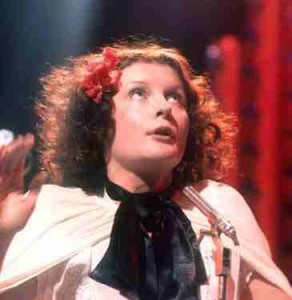 I also played my entire Sweet album.  They are my favourite band of all time (which may surprise those who know me as 1/4 of the Shellac Sisters where I am more likely to play 1920s novelty songs).  I have a sneaking suspicion that many of my American readers will not know who the Sweet are.  But I am almost 100% sure that Yinzerella over at Dinner is Served 1972 would dig them if nobody else….  If I knew how to bung a video in this post I would.  But I don’t, so here’s a link to Ballroom Blitz (my favourite Sweet song) and a picture to give you a feel of them. 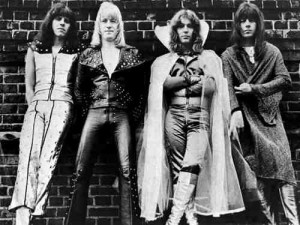 Guess which one I fancied?  The one in the cape of course.  I saw them live once, on a triple bill.  Mud, Sweet and the Rubettes – please bear in mind that this was a long time after all of these legends were at their peak – it was a kind of reunion tour and most of the original band members were elsewhere but Brian (the blonde in the pic above) was definitely there.  The Sweet were really, really, really late coming on.  They were the headliners and loads of people got pissed off and went home because we were waiting for ages.  Eventually Brian came on – completely smashed on drink or drugs – who knows which – and people were booing because he’d made us wait.  It was probably about 20 or so years ago but I clearly remember what he said in an attempt to calm the crowd down.  He did a kind of downwards movement with both his hands and went up to the mike and said: “I’m here now, all is not lost”.  Genius.  I still loved it all and stayed right to the end.  I love the Sweet. 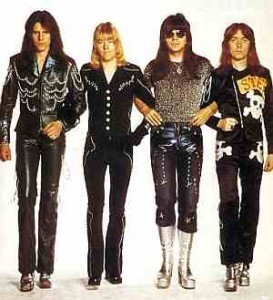 Ann’s chili was very good.  I made copious notes about the spicing for the book and I wolfed down a big bowl of it Columbo style (no rice – just a bowl of chili).  I’m tempted to have a bit more but it’s New Year’s Eve tomorrow night and that means (by tradition) Vincent Price’s Goulash is on the menu so I shall refrain.  Here’s an uninspiring picture of the chilli – it’s nice when baked though because it goes a bit crispy on top. 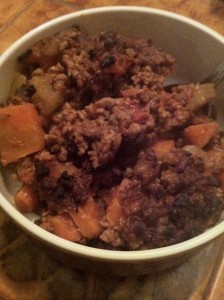 It made me laugh to see my new year’s resolutions from last year – I looked back on the blog.  There is no getting away from them when they are written down on the interweb.  NOTHING I said I was going to do was achieved.  I guess I should feel bad about that shouldn’t I?  I shall make some more realistic ones this year.

1 – buy one vinyl record a week (this gives me an excuse to spend more time with the guy who has a record stall on Camden Market that I fancy.  I’ve been resiting him due to the fact that I only seem to be attracted to DJs or men who sell records and I am trying to break that habit.  I shall attempt to be professional about it – ha ha).

That’s a nice resolution.  Even if I just buy singles that is 52 new records in a year.  Hmm.  Maybe I’ll make myself accountable on the blog and admit to what I’ve bought.  Could be embarrassing though…

2 – learn one new song on the ukulele (I am a bit stuck on this as really, I only need to play one song as whenever a gentleman caller BEGS me to play them something, I eventually succumb and play “Aint She Sweet” and as soon as I am finished they immediately grab the uke off me and play Stairway to Heaven or some such tricky number with great aplomb.  Grrr!).

3 – it seems right to have three.  Let me think.  I’ll come back to you.  Might be something about styling my hair like Ann’s once in a while… 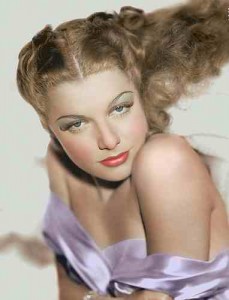