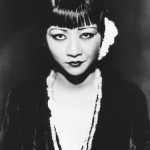 Had another bash at Anna’s duck dish last night as Daryl (we must get him a film star name) came round for dinner.  The duck was definitely not as nice as when I made it for Edmund and I tried to work out why.  Was it because I’d used a different type of mushroom?  Not enough ginger and garlic?  Too much oil?  This, and the information on the cover of the latest Sainsbury’s magazine that all recipes are “thrice tested” has put me in a quandary.  WHEN will I have time to thrice test all 52 recipes?  For tested they must be, I want them all to be cookable, delicious and a treat to eat.  Hmm.  I must knuckle down.

Daryl did make me laugh as I kept putting down my own dinner (if you know what I mean), saying things like, “It’s not as nice as last time,”  and “it’s OK but not brilliant”.  He brandished his chopsticks towards me saying, “hush up sweetie or I’ll stick these up your schnozzle”, quite rightly observing that a hostess should never draw attention to the shortcomings of her offerings.

I’m just off now to try and put the photo of Edmund in his Silver Screen Suppers T-shirt on the Flickr site…  Check him out: Our Biggest Fan