I do so love Barbra.  It’s just one of those things I cannot get away from.  I loved her as a pre-teen when I was so self-conscious about my nose that I absolutely marvelled at the fact that someone could be a movie star with a massive conk that was actually bigger than mine.  There follows a rather long post about Barbra.  Feel free to go straight to the recipe… 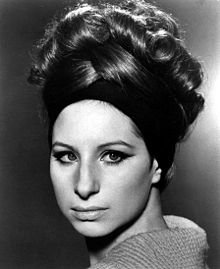 Later on when I was a REAL teenager, I loved her in A Star is Born  snuggled up with someone (can’t remember who) on the double seats at the back of the Halstead Empire watching Barbra being all sexy with one of my all time favourite heartthrobs Kris Kristofferson.  Her hair was so CURLY and fabulous.  She was such a free spirit.  She was so, so, so cool. 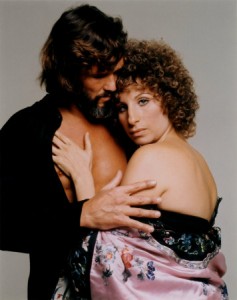 And I loved her very recently when I saw her in The Way We Were with Robert Redford.  I thought she was absolutely mesmerising and just kept thinking throughout that she was far, far, far too good for Redford.  All he wanted to do was strut around in his tennis shorts looking cute, but she was a radical communist with something important to say.  It was never going to work between those two was it?  I absolutely knew that for sure when she was sitting on the porch of their beach house in a dressing gown drinking a glass of wine and smoking a cigarette while he jogged up and down along the seafront in front of her.  Perfect!   But actually, when they split up and she bumped into him years later in the streets of New Yowrk I was really, really hoping she would grapple him to the ground in a moment of passion.  Alas, she’d obviously decided to stick with Mr X Cohen.

I’ve been dying to try her ice cream for ages, and of course, like Barbra, it totally rocks.  I have two recipes for her ice cream in two different recipe books.  They both have the same quantities of marshmallows and milk but one has 2 teaspoons of instant coffee and a pinch of salt, the other has 1 teaspoon of instant coffee and no salt.  I guess sometimes Barbra wanted a subtle, sweeter ice cream.  I went for the former x2 and salty version and for me it was spot on.  Barbara – Kooky is probably her middle name – likes to eat this ice cream with pretzels, so we did too. 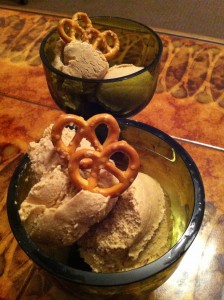 She’s right.  It works!  I can only imagine how she feels about the fairly new trend of salted caramel. She probably flips her wig over that. 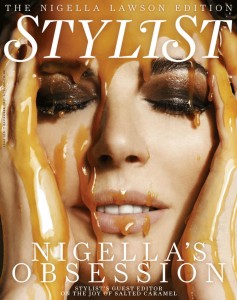 The ice cream hardly melted at all – Mr R remarked that even when he did some washing up next morning (which is, in theory, forbidden for guests to do at my place)*  it STILL wasn’t all melted and squidgy.  I guess that marshmallows probably have quite a bit of gelatine in them right?  Whatever.  Barbra’s ice cream was DELICIOUS and very, very easy.  No mucking about once you have whisked it up and bunged it in the freezer.  Just leave it in there chums.  Relax and enjoy your dinner, booze and good company and serve it when you have almost forgotten it exists.  What a lovely treat to find in your freezer at the almost-end-of-the-night….

* since this was written in May, that man has done a LOT of washing up at my place.  He just rolls up his sleeves and gets stuck in when I’m not looking.  What a guy.  Barbra would love him.