I’m thrilled to be featured on Emerald Street today.  So if you are visiting from there, welcome to the wonderful world of film star dining and drinking!  Check out your favourite stars from the side-bar or just have a roam around…

As the article mentioned Bette’s Baked Beans I thought I would post the recipe just in case anyone fancies making these this weekend.  Bear in mind that they do take a LONG time to cook and if you are going to use raw beans you’ll have to factor in overnight soaking too. 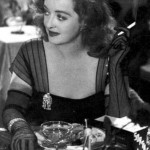 This recipe was featured in a 1940 Modern Screen magazine article about Bette’s favourite foods to make on the cook’s night off.  If you can’t really believe that Bette loved baked beans, I also found this newspaper article from 1940.

So 21 pounds of baked beans and fresh scrod left Boston by plane so Bette can have fishcakes and beans at a party in Hollywood tonight.

Scrod is apparently a young fish (such as cod or haddock) so why not rustle up some David Niven Fishcakes too?!  With ice cream for dessert perhaps? 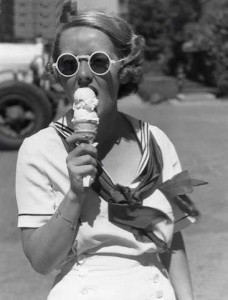 1st step: Wash beans and allow them to soak overnight in cold water to cover.  2nd step: In the morning, drain and cover with fresh water.  Cook slowly – just below the boiling point – until skins will burst. (This is determined by taking a few beans on a spoon and blowing on them gently.  When skins of these beans will break and curl back then the rest of the beans are sufficiently cooked.)  3rd step: Fill bean pot with cooked beans.  Some people also like to add a small onion, minced fine, at this point.  Pour boiling water over the salt pork, scrape the rind until it is white, then score deeply at half-inch intervals.  Press pork down into beans so that only the rind is exposed.  Combine salt, molasses and mustard.  Add the boiling water.  Pour this mixture over the beans and add enough water so that beans are just covered.  Cover bean pot tightly and bake beans in slow oven (300 degrees F / 150 degrees C) for eight hours.  If necessary, add a little water (boiling) during baking period so that the beans will not get too dry.  Uncover pot during last hour to brown the pork.  Serve in the pot in which they were cooked.

It’s nice for me that Anna-Marie at Emerald Street chose Bette’s baked beans to feature.  This was the very first film star recipe I tried way back in 2006 – life was very different then!