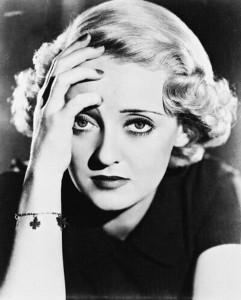 “That’s me: an old kazoo with some sparklers.“

Ooh! A lucky shamrock charm bracelet. I want one!

I’m feeling a bit like an old kazoo myself today so have cheered myself up by re-reading Rita’s verdict on the Bette salad recipe. I haven’t seen Rita in a LONG time which is something I must rectify as she is one of the funniest people I know. Always a tonic.

The salad was rustled up in Cape Town (isn’t this project getting cosmopolitan?!) and Rita shared it with her cleaner Busisiwe – they both loved it. Although Orson professed to not liking three of the main ingredients (figs, dates and sultanas) once he’d had a bite he ate whatever was left on the plate. Rita said she wouldn’t bother with the figs next time as she “didn’t give a fig” about figs and they were hard to get hold of in Cape Town.

The thing that made me really laugh was in reference to a conversation we’d had ages ago about Bette Davis. She said that she might add olives the next time she’d made the salad as they would, “add a twist of acid which is precisely what I would have expected from Bette – having seen her at the Ashcroft Theatre in Croydon, you know: 1973”. Ha ha! Perfect.