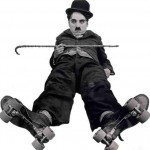 I’m going to have a big bruise on my bum after falling over at my humdinger of a birthday party last night.  AGAIN I didn’t get to bed until 4am.  What a shocker.

I’m going to make a list of who rocked up with their 45rpm singles last night but I think there must have been about 60 people coming and going.  My poor neighbours.

My favourite bit was seeing Charley wig out to “Ace of Spades” which was one of my 5 selections.  But I also really liked dealing with the three burly men who gatecrashed.  I intercepted them in the hall as they were saying, “Yeah, Janine invited us.” I was very firm and said, “It’s my party, my name is Jenny and I don’t know you.  OUT!”  Ha ha.  All along my corridor were beautiful men friends who were squaring up to help me deal with them but even though they looked like right rough old bruisers they could see I meant business and left like pussycats.

My newest friend stayed the night.  He had to get up at 10 to go to work so once he’d got his nice brown suit on I made him stand with his arms out and turn around as I sprayed him all over with Febreeze.  What a genius invention that is.

It’s Corinna’s birthday today so I’m going to take a CC Apple Roll round.  We are having a celebration chicken dinner.  Maybe I can make some kind of joke like Ginger’s “I’ll be round like a rissole”.  I’ll be round like an apple roll….

I am having the BEST birthday week ever.