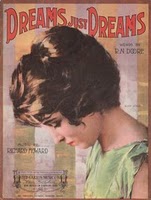 “The Madonna of the Screen”
Just back from the Berlinale which was FABULOUS! There was a “City Girls” retrospective of some fabulous women centred films of the 1910s and 1920s.

Didn’t get to see as many as I wanted to but managed to catch “Dancing Mothers” and loved Alice Joyce as Clara Bow’s mum. The film has a fabulously feminist story line with Alice getting in her car and driving off into the sunset when she tires of her selfish husband and daughter. We don’t seem to have an Alice Joyce recipe but we do have several Leila Hyams numbers (she was also in the film) and of course a couple from the pen (if not the actual kitchen) of Clara Bow.

Charley is coming over to dinner on Wednesday so will rustle him up something in tribute to the spunky flappers of the 1920s.