I’m in bed with the heated blanket on listening to Friday Night is Music Night on R2 and it is FANTASTIC because it the theme is “Bond and Beyond” so there is tonnes of John Barry stuff and now they are talking about Hitchcock.  The BBC Philharmonic Orchestra is playing the theme from North by Northwest and it is glorious.  I imagine this was what it was like in the days before television.  We’d all be sitting around the wireless listening to stuff like this.  I know that one of the things my much adored American friend Caroline is jealous of is our national radio stuff.  It is truly fabulous.  We are so lucky.  I don’t always dig FNIMN but tonight for me it really was perfect.

My charge is back in London after his tour of European hotspots.  He turned up last night looking completely knackered after a big night out in Amsterdam.  He almost missed his coach back because he overslept and only managed to find one sock so he traveled all the way from his hotel there to my flat only wearing one sock.  Ha ha – I remember those kind of days very well and it continues to amuse me that the most crazy period of my life was when I hung out with his parents in Sydney.  But I am really trying to be a responsible adult so I cooked him a square meal last night and it was good but I could see that actually all he really wanted to do was fall onto the blow up bed, which he did as soon as it was blown up.  I just got a text from him saying it was the “best sleep ever” but I expect that when he gets home to Auckland the first night in bed at home in the bosom of his family will top it x 20.

Here’s a truly terrible photo of Constance’s chicken but I think I have nailed it.  I used the first chicken I’d ever jointed on the knife skills course (it’s been in the freezer) and bloody delicious it was too.  Actually I sort of got told off at work today for swearing too much so I should probably say, and VERY delicious it was too. 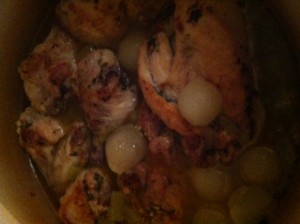 Ha ha – it was very funny just now hearing Mark Kermode say “Friday Night is Music Night” as a sign off at the same time as Simon Mayo, in unison.  Not exactly sure why.  I’ve a feeling he didn’t really want to do it but was PAID to do it so he had to. 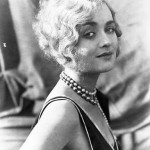