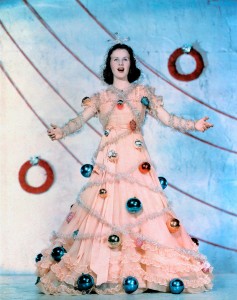 Yes, I know it’s too early to start thinking about Christmas but I just couldn’t resist!

I can only imagine the shenanigans going on Stateside regarding the wedding of the century. I think it is all out in the open so I hope I’m not giving the game away by saying I’ll be travelling to Austin, Texas in January to see my Sister of the Skillet tie the knot. Let’s get Christmas out of the way QUICK, I can’t wait! I have already bought a dress equally showstopping as Deanna’s for the occasion…

Ruth is leaving the organisation to her mom, who if test cooking is anything to go by is amply equipped to organise absolutely anything! Here are her verdicts on the first three recipes she rustled up for us. Firstly Joel McCrea’s Frojoles with Cheese – a one word verdict – Bad!

Surprisingly (especially as it is one of my favourites) Jean is the only person who volunteered to test cook Constance Bennett’s Spanish Chicken. But the “disjoint two fat hens as for frying” instruction has been queried – one is quite enough she says!

Last but not least, Deanna’s Salad Dressing. A “bit of a pain” to make as it has so many ingredients says Jean, but the verdict was “good” and “similar to a Louis Dressing”. Of course I had to look this up on Wikipedia and I’m pleased to see that this is the dressing used in a Crab Louis dish.

The recipe for Deanna Durbin’s Santa Monica Dressing can now be found here….