David Niven was plucked from the pack for this month’s recipe of the month and it’s a goodie.  I love fish cakes.  I like the way David writes a recipe too…  I’m going to transcribe his recipe exactly as he wrote it, then let you know how I actually made them… 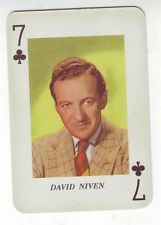 As David wrote it:

Mix it up with boiled potatoes.  Pop in a raw egg to bind it and a little anchovy paste because I say so.

Add a chopped onion just for the hell of it, then make little cakes of this shambles.

Sprinkle some flour around the general area of the cakes and park some bread crumbs atop them. 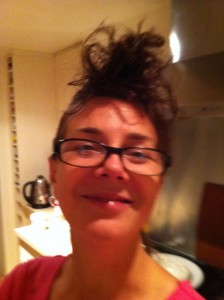 As I am the kind of person that likes to follow recipes to the letter, I asked my chum Battenburg Belle (above doing her Morrisey impression) who has made many a fish cake how she would do these.  We made them together (with her doing most of the work as usual) and here is how we did it.

We used 720g potatoes and 440g salmon.  BB poached the salmon in 3 glasses of water and a glass of white wine with a bay leaf, some fresh tarragon and a few peppercorns.  According to my notes, BB cooked the salmon in this fragrant mixture for around 7 minutes. 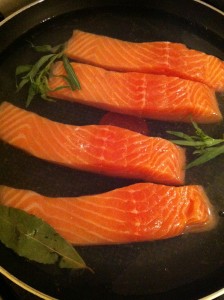 BB added “lashings of milk and butter” to the boiled potatoes, mashed them up and then added the potatoes to the flaked salmon with some onions she had fried in butter.  BB’s tip is that you should add the potatoes to the salmon rather than the other way round as she says: “you want it to be fishy rather than potatoey” which makes sense.  This way you can keep some of the potato aside if you think it is too much.  I’m sure she bunged some salt and pepper in there at some point (I am very jealous of her new measuring spoons which have caterpillars on)… 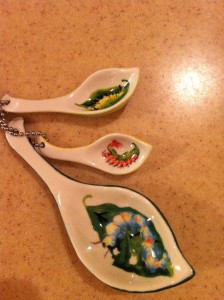 When I mentioned the raw egg that should have gone in to bind it, her response was “nah, bollocks” and she decided to dip the fish cakes in egg and then breadcrumbs.  She didn’t want to fry them in deep fat (she’s ever so headstrong) so she shallow fried them in butter then baked them in the oven for a bit (sorry to not be specific!).  Here they are before going in the oven. 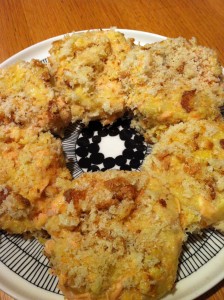 So a freeform recipe became even more freeform in the hands of Battenburg Belle but I guess when you REALLY know how to cook, like she does, it’s easy to muck around with recipes once you have the basic template.  I am a stickler for following a detailed recipe but I’m going to try and be a little less uptight and more organic in the future.

If you have a go at David’s recipe – or if you are led by reading it, to go your own way with his as a guide, I’d love to hear how your fish cakes turn out.

When we were making these, BB’s cats were very interested in how things were going.  As BB put it regarding Elvis (the black and white one) “he’s only got three legs but he’s got an excellent sense of smell” and Pearl seemed keen too. 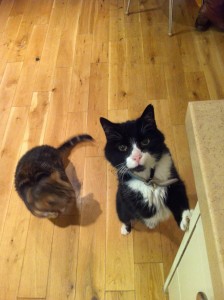 In the few weeks between having fun making these with BB and writing this post Elvis and Pearl have both left the building to eat fish cakes in kitty heaven.  RIP you lovely kitties, we will miss you… 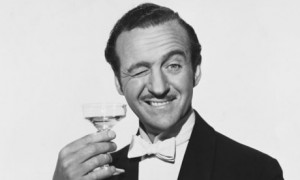