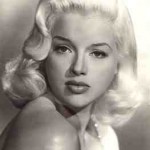 I have a Diana Dors curry in the slow cooker and will be channeling her bombshell energy on Wednesday as I’m off to an awards ceremony in a dress that I think is the kind of va-va-voom item that Diana herself would have worn.  I will feel UPHOLSTERED and whether I win the award I am up for (I have a one in three chance) or not, it doesn’t matter.  I will feel like a million dollars in this piece of glorious architecture that was just waiting in a vintage clothes shop in Muswell Hill for me to walk in and find it.  It is without a doubt the most amazing dress I have ever owned.  And it was £2 short of my maximum frock budget.  The label says, “Carnegie – It’s a Symphony”.  Hell yeah!

I’ve had a pretty amazing weekend although it might not sound like it….  Basically I have really got to grips with “Chav Corner” as Rosalind calls it.  The area under my bedroom window that was full of unpacked boxes and umpteen laundry bags of clothes is now almost empty.  I can walk all the way around my bed – imagine that!  I think the impetus was the sudden realisation last week that there would be room for a writing desk there if I actually tackled all the junk and got rid of some.  And today I did.  Lots of stuff is out of here.  Am really liking the new empty space.  What a luxury.

I have been watching a lot of films by myself this weekend.  I seem to have got over the idea that this is a self indulgent practice.  Why not?  Other people watch a lot of TV on their own so this is more or less the same thing.  I had a Ginger Rogers double bill last night with “I’ll Be Seeing You” (I was very impressed with Shirley Temple in this) and “Monkey Business” (Marilyn was fab as always and the monkey cracked me up)  and tonight the fabulous “Ball of Fire” with Barbara Stanwyck which I really enjoyed.  I wish I could remember some of Sugarpuss O’Shea’s wisecracking lines.  Hold down the clutch?  Pull in the clutch?  I’d love to say that line in the right context but I’ll have to watch the film again to get it exactly on the knuckle.