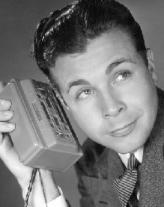 “The best thing about switching from being an actor to being a director is
that you don’t have to shave or hold your stomach in anymore.”
Had a very lazy weekend after an old skool style night on Friday with Sidney and his chums. We didn’t get home until 5am. Outrageous. There has been a lot of falling asleep in front of the sofa during the athletics to catch up. Luckily we managed to stay awake to see Usain Bolt break the world 100m record. Sidney was full of national pride and is still shouting, “YES, JAMAICA” every now and then….
I made a batch of Dick Powell’s chowder for the two of us even though it stated “serves 6”. We almost ate the whole saucepan between us, and Sidney may have been correct in his observation that it might serve 6 short people or 4 long people. Maybe people weren’t so greedy in the 1940s… In a reversal of Dick’s roles I’m going to have to hold my stomach in tomorrow.
Share
Tweet
Pin
0 Shares