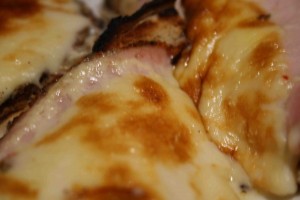 Happy St David’s Day.  In tribute to my spiritual homeland of Wales I decided to cook something with a Welsh flavour.  What better than Truck Drivers Welsh Rarebit?  Caws Pobi – now there’s lovely!  I have no idea why Dick’s recipe specifies that this is the kind of Welsh Rarebit a truck driver would have had, perhaps he was playing such a character at the time the recipe was published? I’ll have to look into it.

The Welsh Rarebit was GOOD.  The flavour was really nice but alas, I did have a lump of cheese with surrounding liquid rather than a smooth spreadable mass.  I had to divide the recipe by 4 which may have something to do with it.  Alternatively, it could be the cheese.  I’m going to ask the lovely woman in my local cheese shop which type of cheese she recommends for a good solid Rarebit. 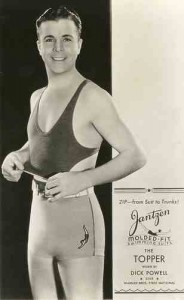 If you want to know more about St David’s Day, nip over to the lovely Lauren Hairston’s blog.  What she doesn’t know about British high days and holidays, nobody does!  I love getting her blog updates about all these British traditions that are new to me.  I didn’t even know about Stir Up Sunday until I “virtually” met Lauren. It’s the day when people traditionally made their Christmas puddings. This year it is in the diary.

OK, I’m off to Llanfairpwllgwyngyllgogerychwyrndrobwllllantysiliogogogoch.  Actually I’m off to the airport.  My lovely co-conspirator on the Silver Screen Suppers project Caroline Frick is here for the weekend from Texas!  She’s been in Paris en route and those pesky French folk at customs confiscated the Poblano peppers she was bringing me.  NUTS!