In honour of the 50th anniversary of the UK release of Cleopatra Mr Rathbone and I had a screening and lunch courtesy of Elizabeth Taylor. 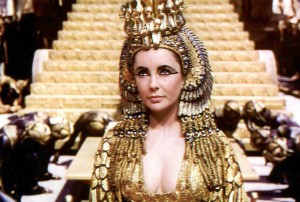 I attempted the make up, straightened my hair and wore the most suitable frock I could find: 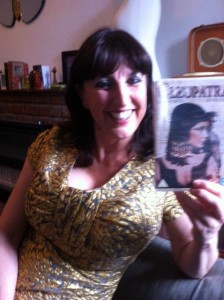 And we put Cleo on the DVD projector with the lights off even though it was a gloriously sunny day.  Halfway through the first half Mr R proclaimed that the film seemed be mostly “talking with occasional walking from one place to the other”.  We both agreed that we liked it when Liz was onscreen as she looked freaking gorgeous, but apart from that it seemed to be mostly men shouting at each other.  We did laugh when we realised who was playing King Ptolemy. 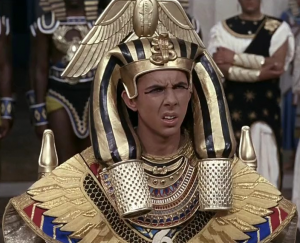 If you can guess without looking it up on t’internet I’ll be very impressed with you.

I was very pleased when both of us agreed that after dinner we wouldn’t bother with the second half but would watch an episode of Columbo instead.

Dinner was good though.  It was Liz’s Chicken Steamed in Wine – recipe for which you will find here…  As it was a special occasion I took the plunge and made it with Sauternes exactly as Liz suggested rather than A.N.Other white wine.  It really was very good – the wine cost 14.99 for a small bottle and the whole lot went in the pot but it really did make for a lovely fruity and tender chicken. 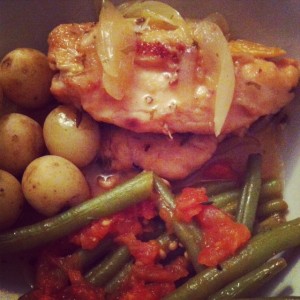 I followed her special way of cooking Haricot Verts with tomatoes to the letter – they were very nice indeed.  Basically steamed with skinned and chopped tomatoes, bay leaves and thyme.

The pudding was not a great hit.  Mainly I think because Mr Rathbone was very suspicious of the use of artificial sweetner.  So was I, but if Liz has it in her recipe I want to use it.  So I have a great big bottle of artificial sweetner in my cupboard now that I’ll probably never open again.  It did give me a laugh in the supermarket though when Mr R looked at my shopping list and because my handwriting is so appalling he wondered why I had “angora sweater” on there amongst all the foodstuffs. 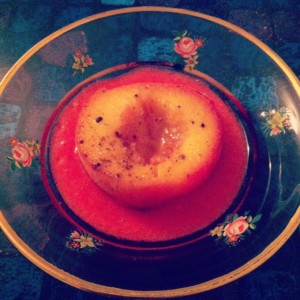 Once Columbo had finished Mr R admitted he was still a bit peckish and said, “no offense to the peach but I think I’ll have a few ritz crackers and a handful of peanuts”.  I like a man who knows where the snack cupboard is in my house and is not afraid to help himelf.

So it is a thankyou to Liz for the chicken and haricots and a “meh” for the peach.  Recipe is here though in case anyone fancies it. 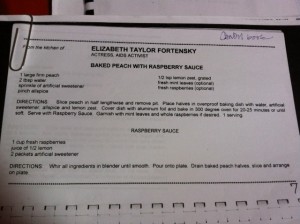 and one more pic of Liz for good measure. 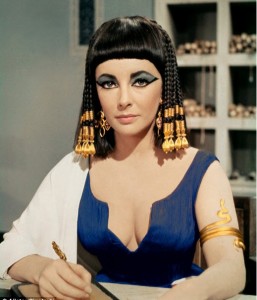