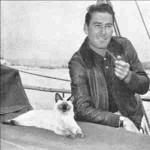 Aw Errol – you were such a softy really.  Are you on a BOAT with that cat?!

I’m recovering from a late night DJing job at probably the nicest wedding we have ever played at.  The bride was so HAPPY.  I’ve been to so many weddings lately where the bride just doesn’t seem to be enjoying the whole proceedings but last night’s bride was loving every minute.  It restored my faith in the possibilities of long term commitment.  As the only non-married Shellac Sister I am keeping my eyes peeled from now on.

My zoo-mate Kim sent some nice pix of her version of Errol’s baked fish – I’ve just popped them on the flickr site.  I must have another go at this one soon as it is delicious.  Kim liked it too saying, “I got an amazing taste of each layer of the dish with each mouthful” and her guest liked it too, being surprised how well the green pepper worked with the fish and banana.  It’s a weird combination but it just seems to work.  I’m intrigued as to who the dinner guest might have been…  She’s a mystery that Kim!