Ooh, the Happy Pappy Eggs were good.  Why?  Bacon fat!

Tonight I’m participating in a worldwide cookalong for two.  If you drilled a hole through the centre of the earth from London, you probably wouldn’t end up too far from Melbourne, which is where Taryn of Retro Food For Modern Times is cooking up the exact same din dins.

Well, she would have done, around the same time by the clock, but because of the time difference, she’ll have eaten it all, done all her washing up, been to bed, and got up again, and gone to work by now…

and I am watching it right now, after drinking two celebratory Sex on the Beach cocktails, naturally! 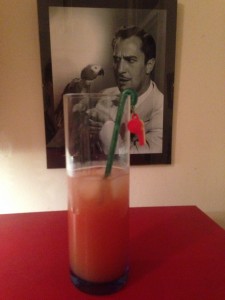 It’s a very strange film, and I wonder what Taryn made of all the Australian accents…  Was Fred Astaire attempting one?  Was Ava Gardner?  It’s hard for me to tell.  She looks GORGEOUS though, naturally. 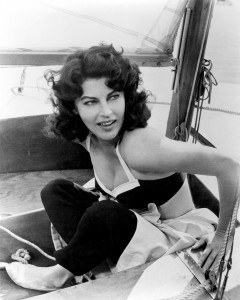 So our menu for the movie, was Happy Pappy Eggs and Ratatouille – both recipes proposed by Gregory for “The Classic Celebrity Cookbook” compiled by Ken and Joan Collins (but not THAT Joan Collins). 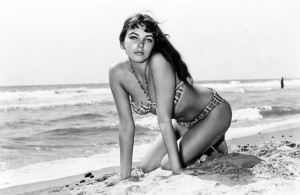 The eggs were goooooooooooooooood. Gregory’s recipe was for 4 but as I was dining alone, here’s how I made them for one.  I put about 2/3 tablespoon of bacon fat in a small frying pan and fried a chopped up bunch of spring onions – this many, but not the dark green bits: 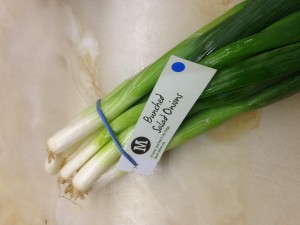 I then added two whisked up eggs with a three-finger-pinch-worth of sea salt into the pan.  As Gregory puts it about the eggs: “Pour over onions and scramble.” 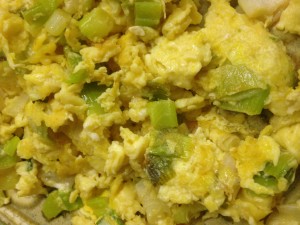 I’m sure Mr R thinks I am bonkers to drain off the bacon fat when we make our Sunday morning fry ups, and hoard it in the fridge.  But I don’t think he would think so, if he’d had some Happy Pappy Eggs.  Good stuff!

Gregory’s Ratatouille was delicious too.  How couldn’t it be, when it contained all this lovely goodness? 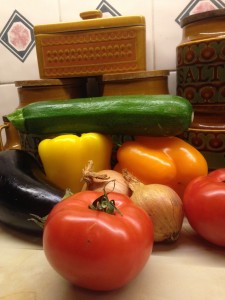 I cooked it for a lot longer than Gregory recommended (probably for more than an hour) as I wanted the aubergine / eggplant to be really soft.  Chewy aubergine freaks me out…  Gregory’s recipe was a bit strange (there may have been a bit missing as it wasn’t clear which vegetable required peeling – the tomatoes?) but ratatouille is pretty fail-safe however you make it, just bung it all in a casserole and gently heat it until it’s a big old mush like this: 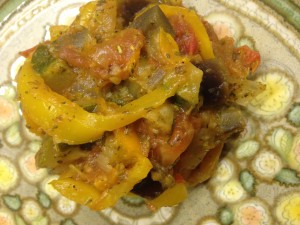 As the Christmas greedy season meat-fest is already upon me, I was really glad for some nice vegetables…  Mm.  Very – tasty – combination.  Especially after a couple of Sex on the Beaches… 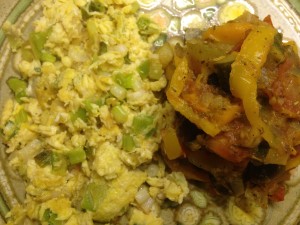 It was really great fun having a spinster-esque night in, with a film I have never seen, a cocktail I’ve never drunk before and eating things I wouldn’t necessarily have chosen to make myself.

Next time I have some spring onions to use up though, it’ll definitely be Happy Pappy Eggs for me.  But only if there is some bacon fat knocking around…

I do hope Taryn invites me to participate in her next “History Happy Hour”.

It IS and it made me laugh out loud lots of times, here’s a link, check it out chums…

I wish I’d thought of this comment about the classic combination of Happy Pappy Eggs and Ratatouille:

Oh yes indeedy!  Thanks Gregory and THANKS TARYN! 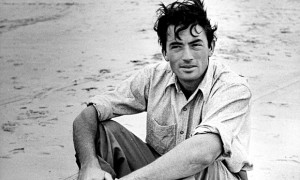