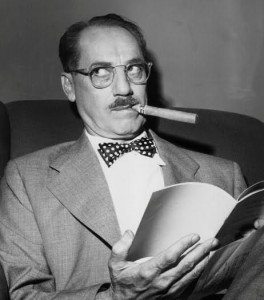 “From the moment I picked your book up until I laid it down,
I was convulsed with laughter. Someday I intend reading it.”

My meeting on Thursday was fabulous. I am inspired, enthused and excited about the nebulous entity that will be the book AFTER Silver Screen Suppers. Better get on with this one first though I guess. As Groucho says, “Time flies like an arrow, fruit flies like a banana.”

I am loving the surreal banter that I am having with test cooks all over the world via the medium of the email. Katharine in Cardiff is now my official advisor on all things Matzo related. She has cleared up my confusion as to the exact definition of a “Tea Matzo”. She also tipped me off to the fact that Matzos with butter, apricot jam and little morsels of cheese dotted on top are utterly divine.

When making Matzo Ball Soup you could of course buy some “kneidlach” (Matzo ball mix) but where’s the fun in that?! Ms H. said that it was the first time she had made Matzo balls that weren’t out of a packet and they turned out “a million times better”. Although alarmed at the amount of chicken fat in the recipe, she later came to the conclusion tht this may be the secret of their success. After popping up to the top of the chicken broth and bobbing around for 15 minutes or so they emerge, “very soft and light and fluffy and tasty”.

Katharine also let me know some delicious nuggets of information about Marilyn Monroe. Apparently when she was married to Arhur Miller she once helped her mother-in-law prepare chicken soup and matzo balls. For a while Marilyn embraced domesticity and learned to make pasta. She draped sheets of it over the back of chairs and dried it with a hairdryer. Superb! But where are Marilyn’s favourite recipes. In our collection of over 3500 we don’t have a single one. The call is out!