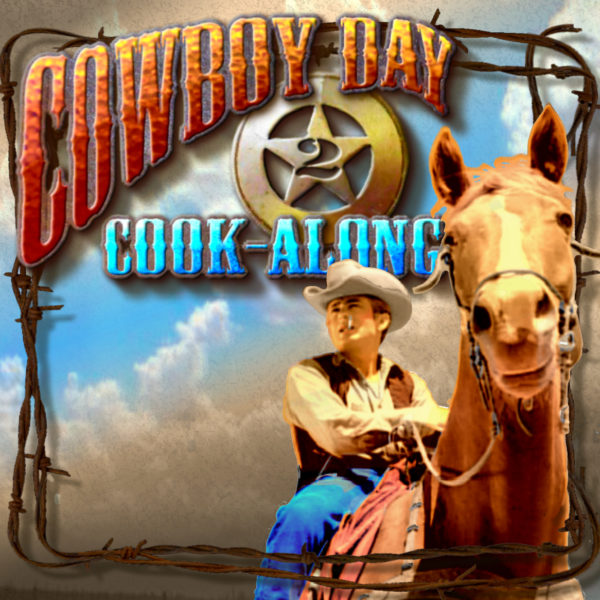 Yee-haw and giddy-up!  It was National Day of the Cowboy yesterday and those who know me well, know that cowboys are my weakness..

Also, I will grab ANY opportunity to wear a cowboy hat.  I absolutely love hats and I do not know of a single person who doesn’t look fabulous in a cowboy hat.  Here are a few of my faves: 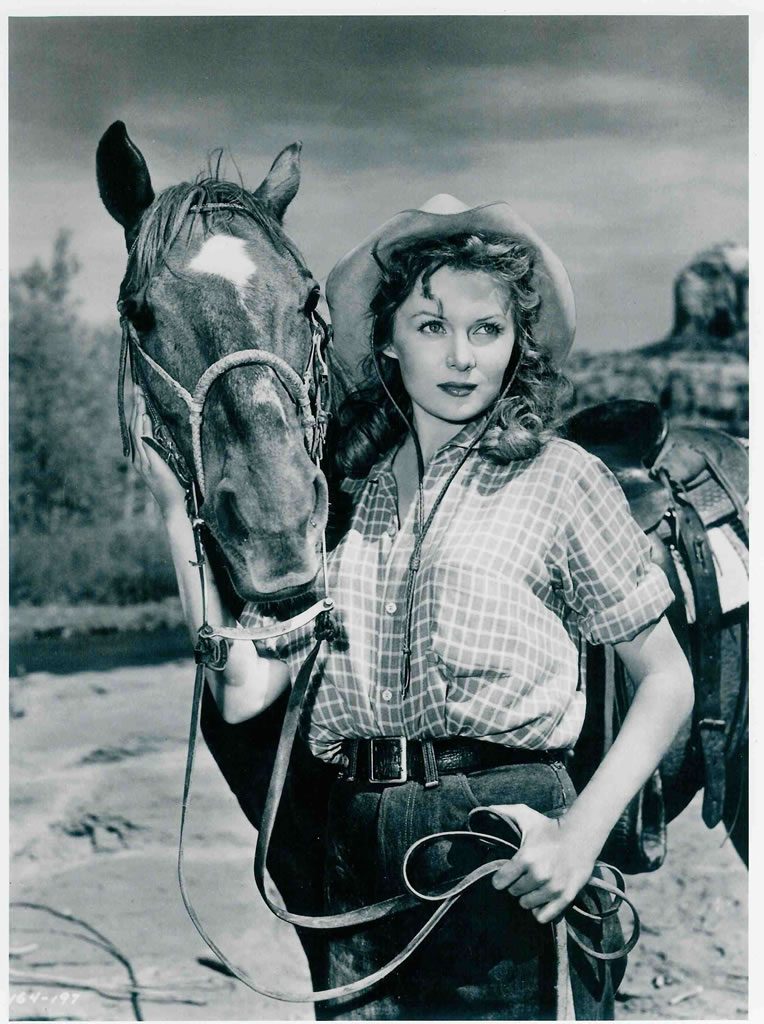 Rhonda Fleming sent this photo to me HERSELF when I wrote to tell her that her recipe for Hollywood Ham Loaf was delicious! 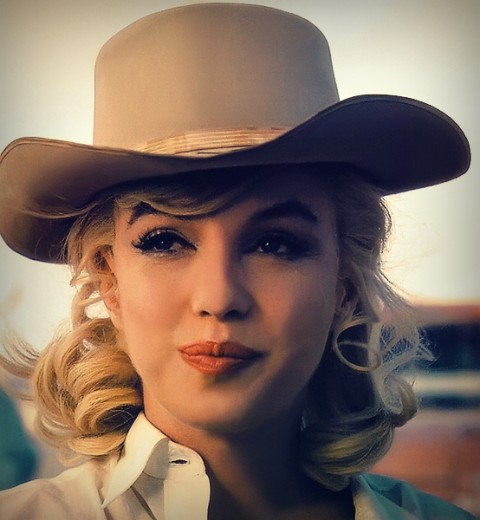 Marilyn looks fabulous whatever she is wearing, even if it is just a squirt of Chanel No 5 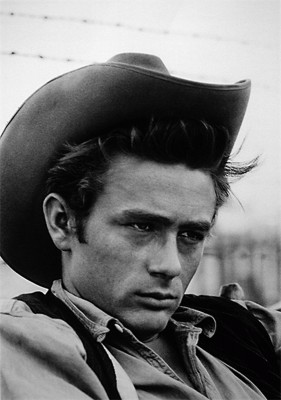 So, James Dean is the actor that has given many of us around the world the chance to have a special kind of hoe-down on National Day of the Cowboy.  Organised by the fabulous Greg Swenson of Recipes for Rebels, we all don our Stetsons and get cooking up some cowboy-esque fodder. 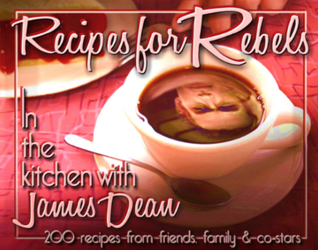 This year, Battenberg Belle and I planned to host a cowboy themed supper club, but due to an incident involving a vicious letterbox, BB was incapacitated. 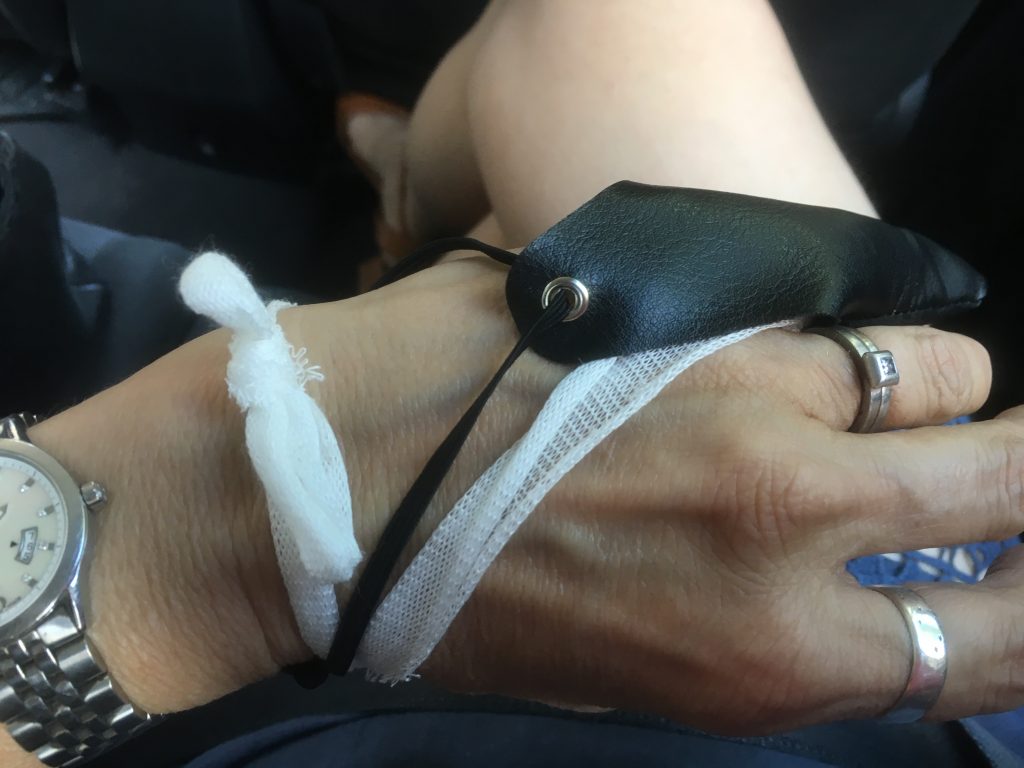 We therefore decided to change it to a pot luck dinner and man-o-man, did everyone step up to the plate?  OF COURSE THEY DID.  Cathy’s table was absolutely heaving with cowboy style fodder: 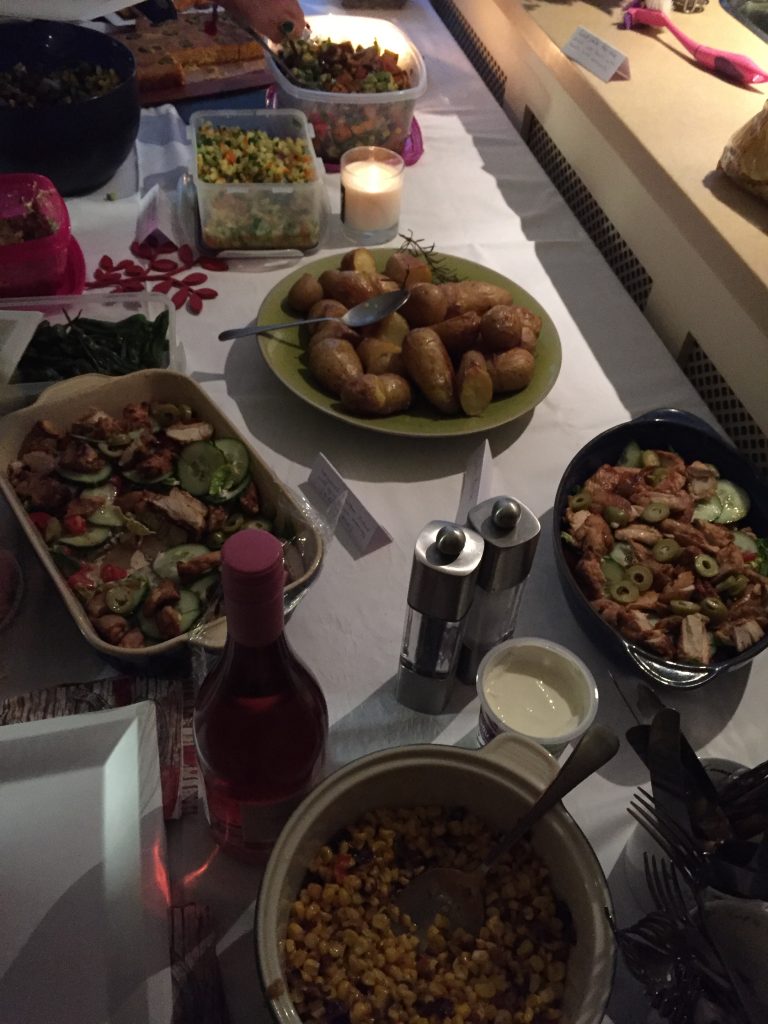 This is my first plateful of 3, there were so many delicious things to try, I was very greedy indeed… 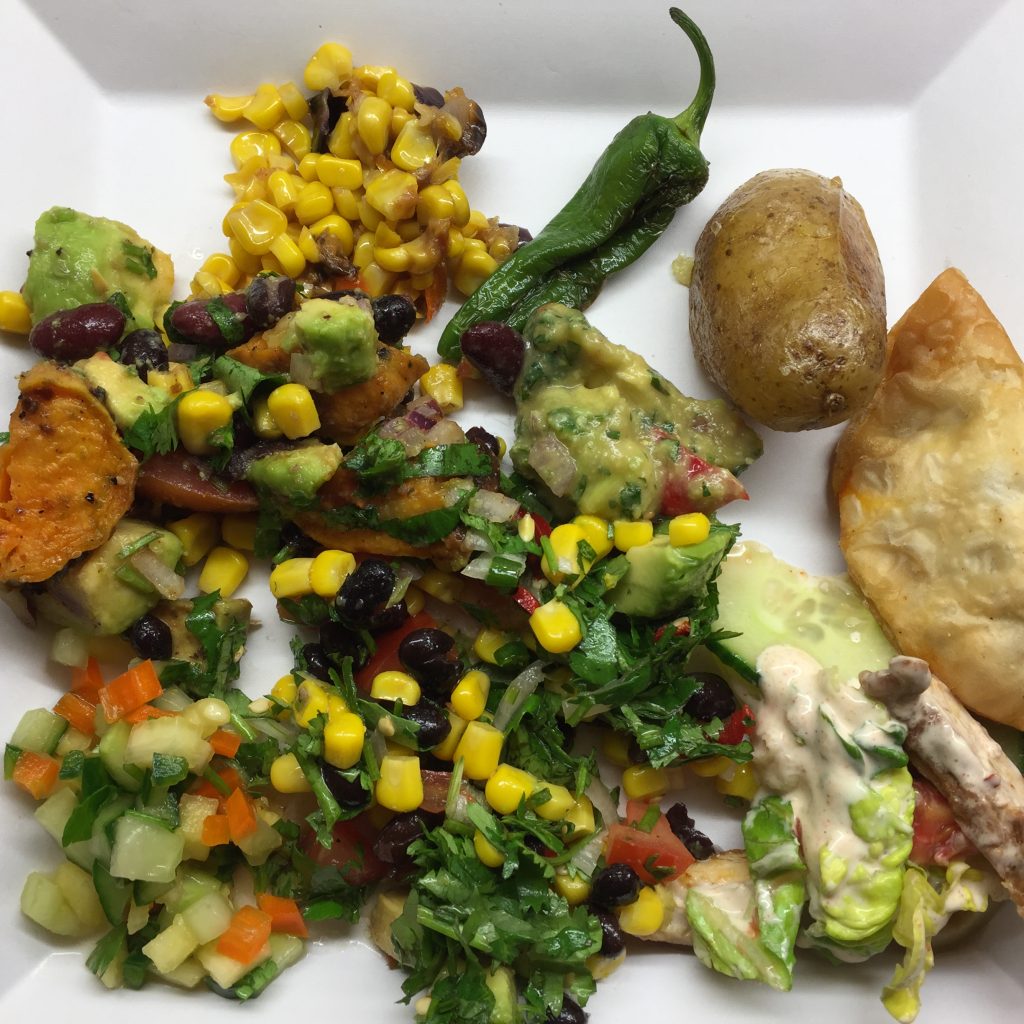 Battenberg Belle made Trish Van De Vere’s All Day Chili in a Pot so I’m sure there will be a report on that sometime soon.  I made James Garner’s Oklahoma Chili 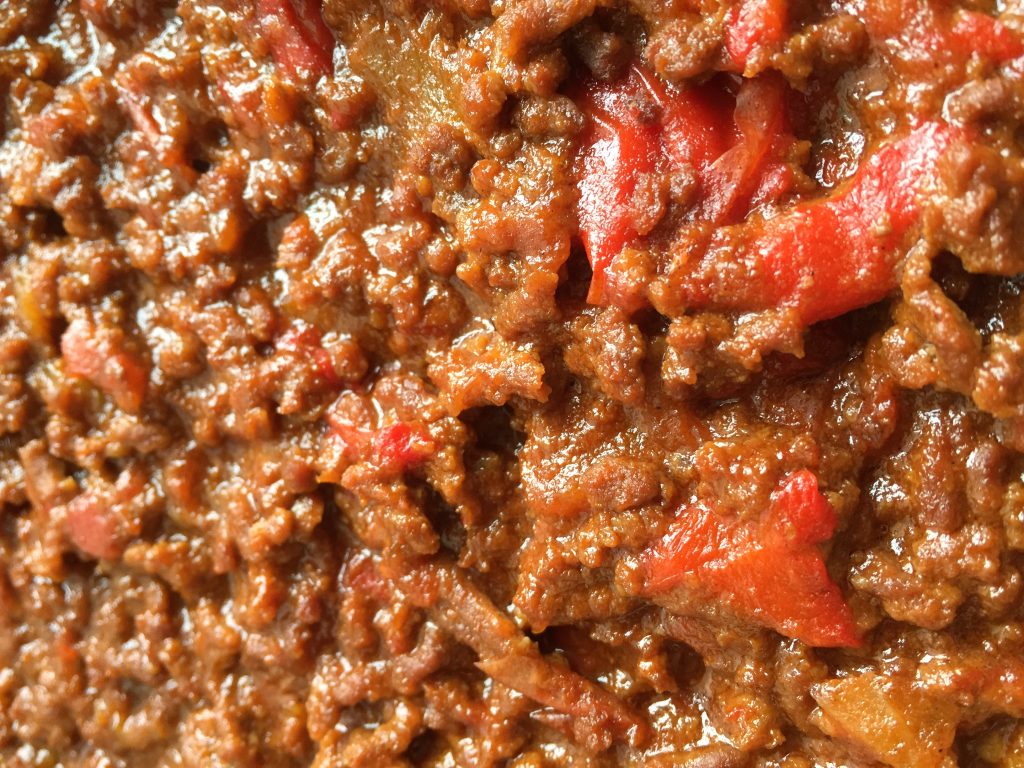 which IMHO is the best chilli in the world… 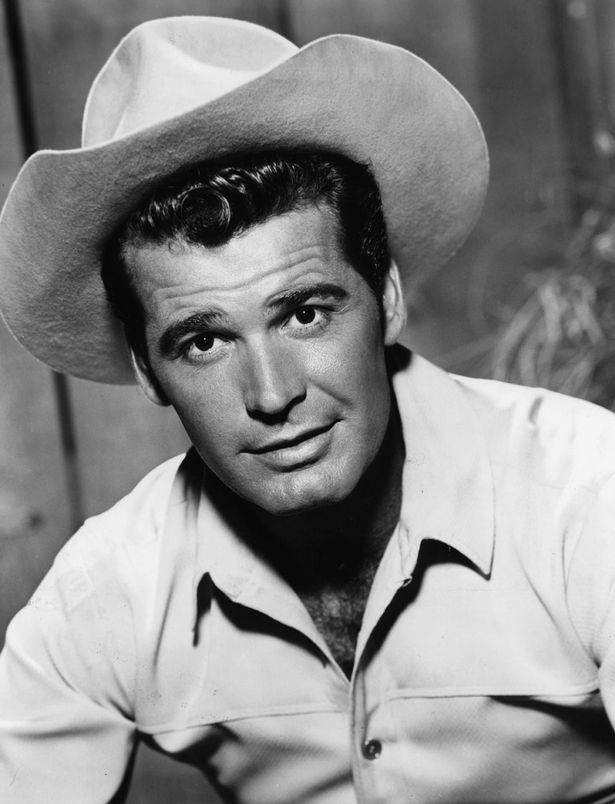 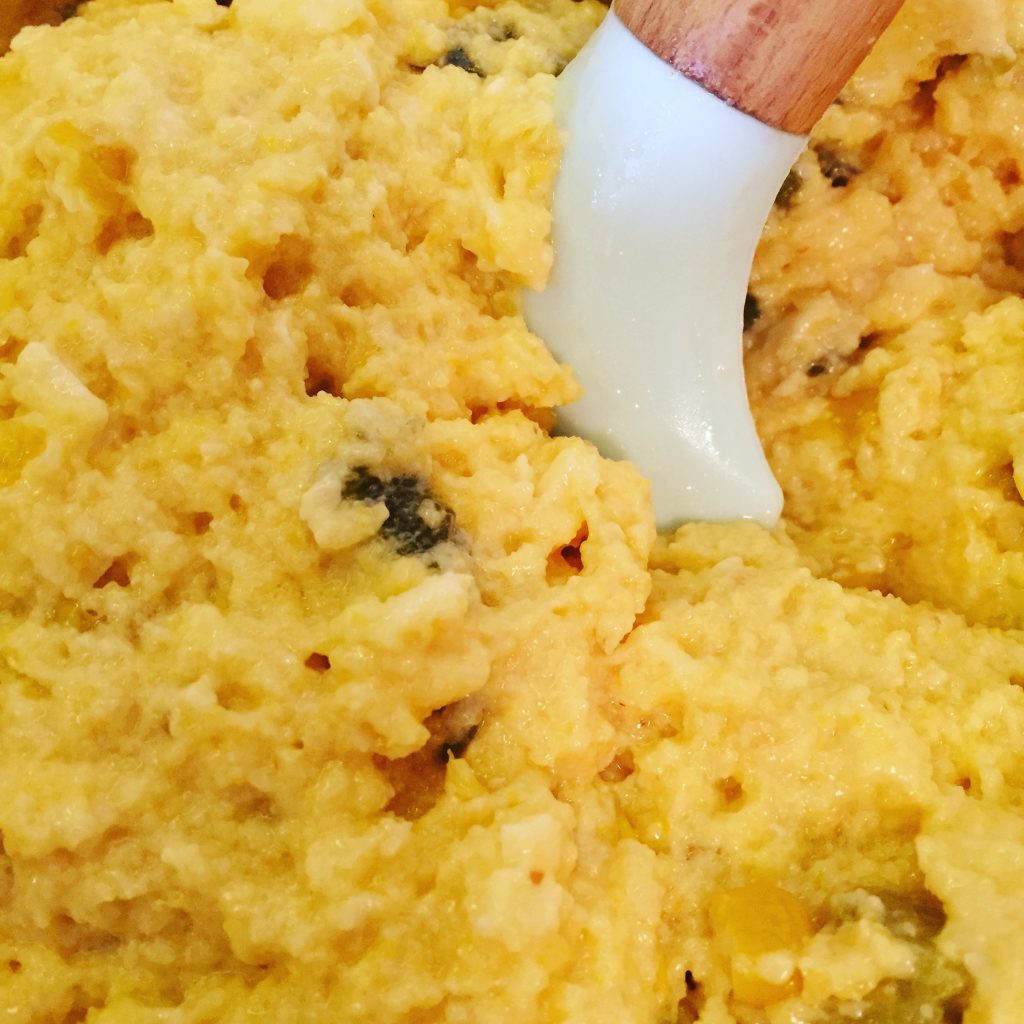 Now then.  As per my previous post about how things are not always perfect in the Silver Screen Suppers kitchen, I made a schoolgirl error… 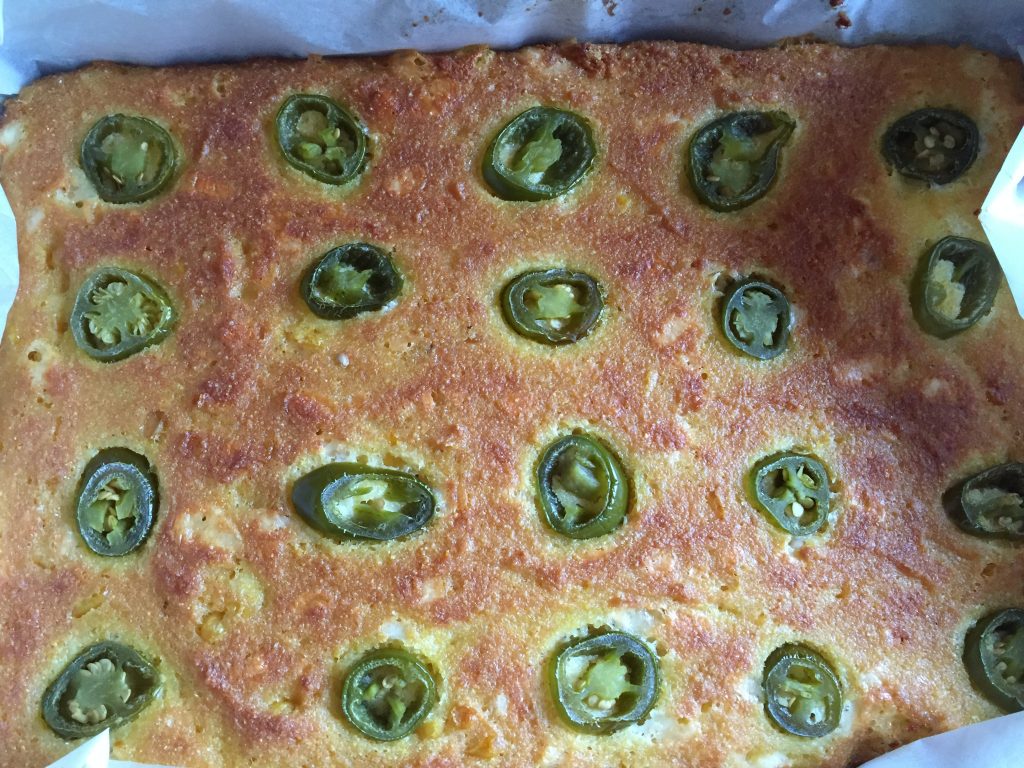 I used bicarbonate of soda instead of baking powder – what an eejit!  The cornbread was still good, but I’m going to have to make it again to see what difference a raising agent makes.  As I mentioned in a blog post about Irene Dunne’s Chocolate Vinegar Cake “Chums, the two are not interchangeable!”

Hoyt’s recipe is at the very end of this post if you fancy trying it, verrrrrry tasty!  I made two versions, one exactly to the recipe where the jalepenos were chopped up and mixed through, the other (in the pic above) where I just put a few on top and none in the mix.  This was for those who might not like their cornbread so spicy.  I figured they could always peel off the pepper and chuck it over their shoulder as no doubt a real cowboy would.

Here are a few pix of our hoedown – I wish I’d taken more but I was too busy eating and drinking.  There were around 25 fabulous cowpokes gathered together and we had a very merry time.  Everyone wore cowboy-esque outfits and as Michael put it: “Looks as though we’ll be raising a barn later…” 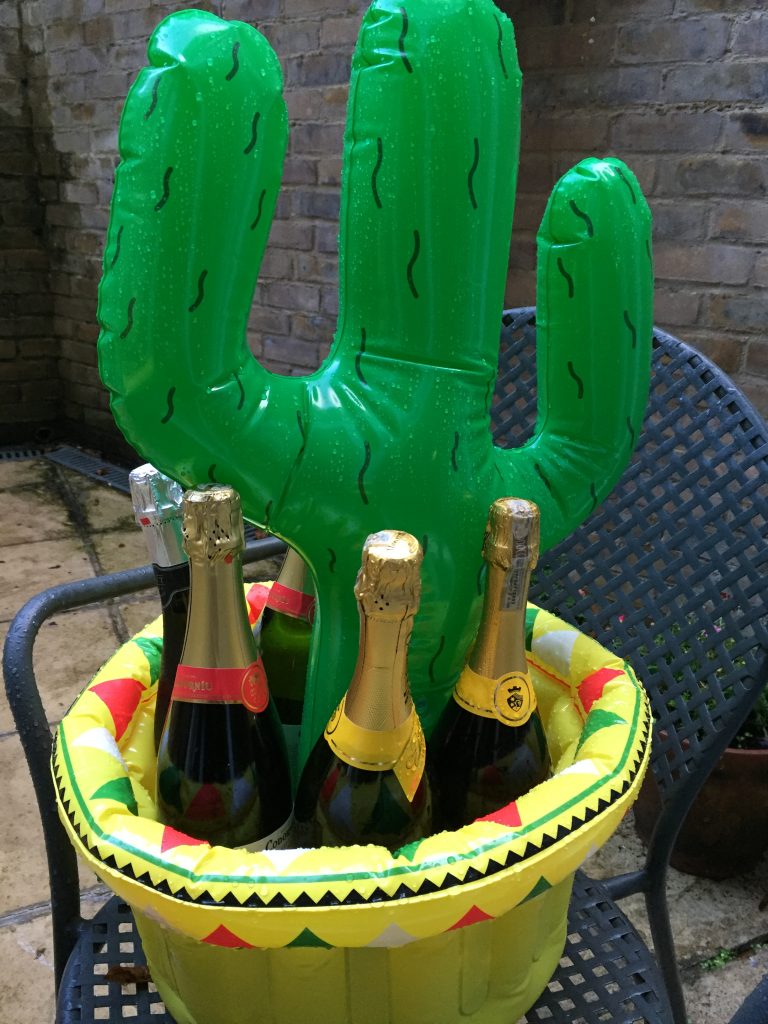 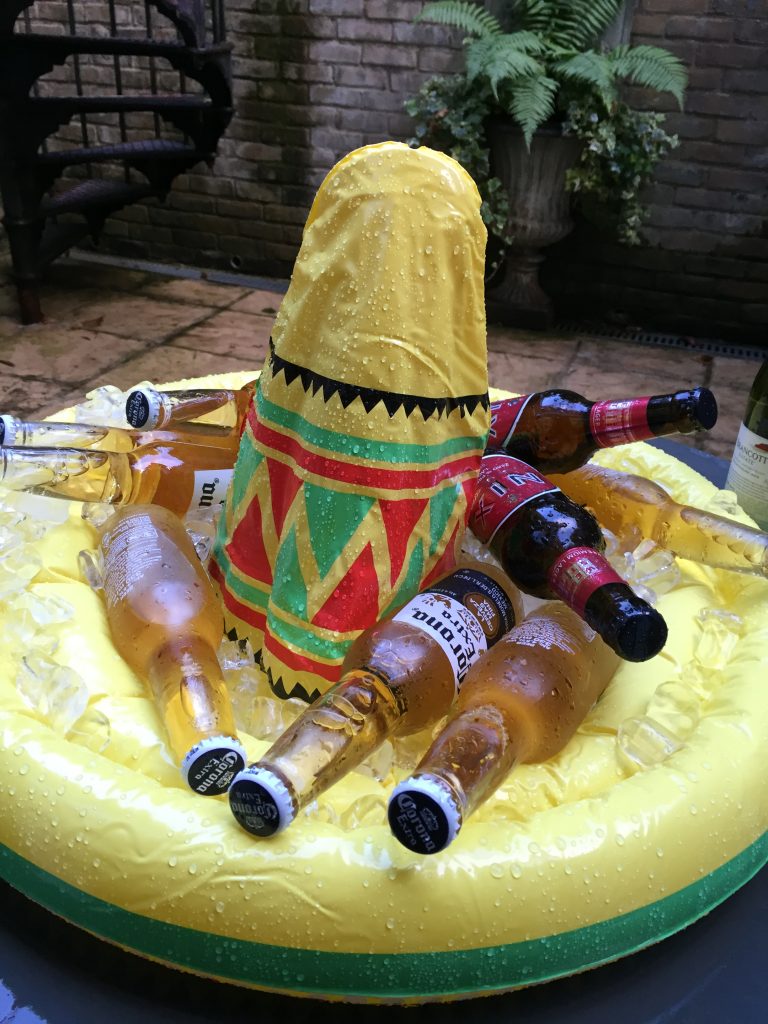 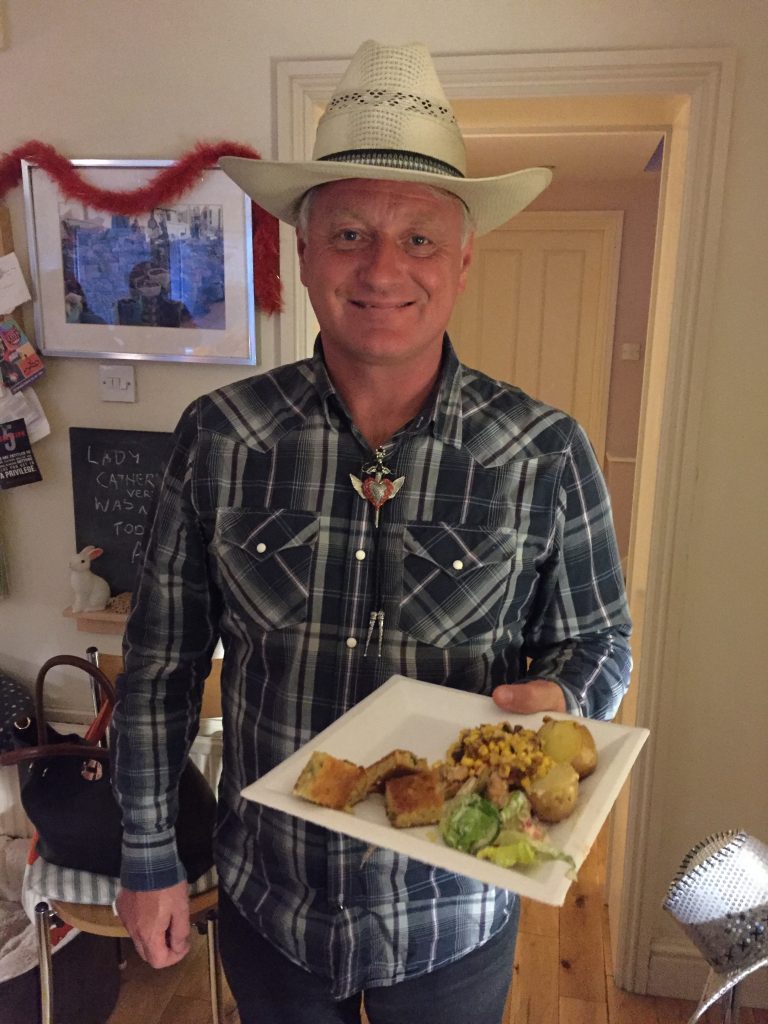 There’s cornbread on that there plate! 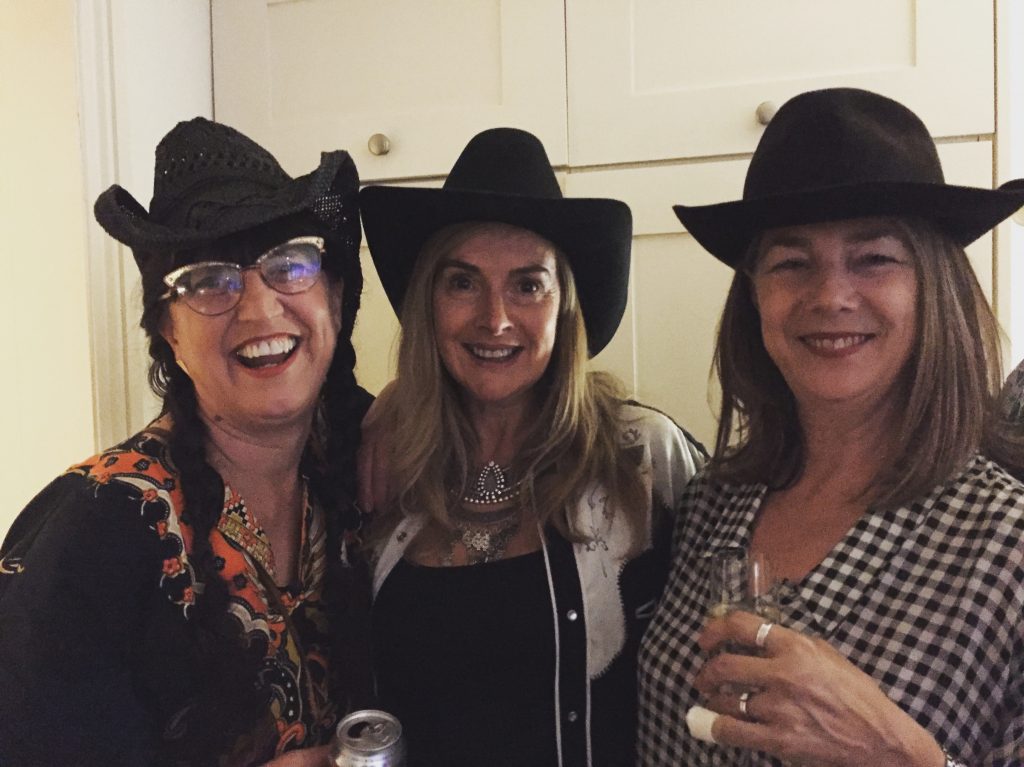 Me, Battenburg Belle with aforementioned injured pinky and Becky who made…. 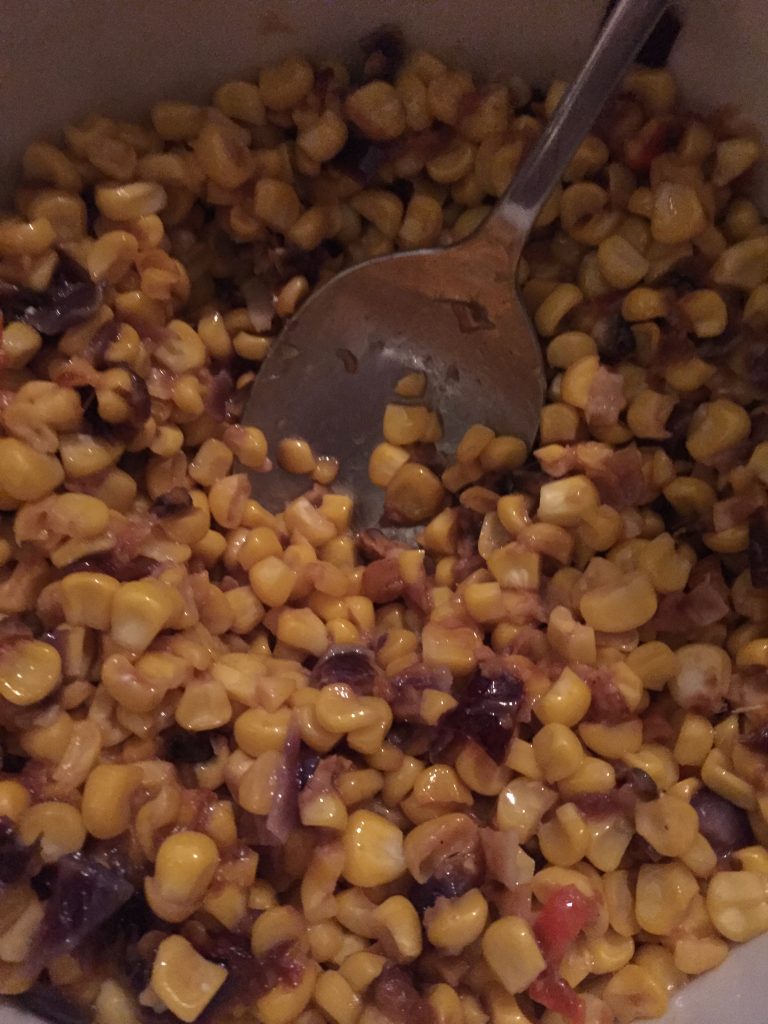 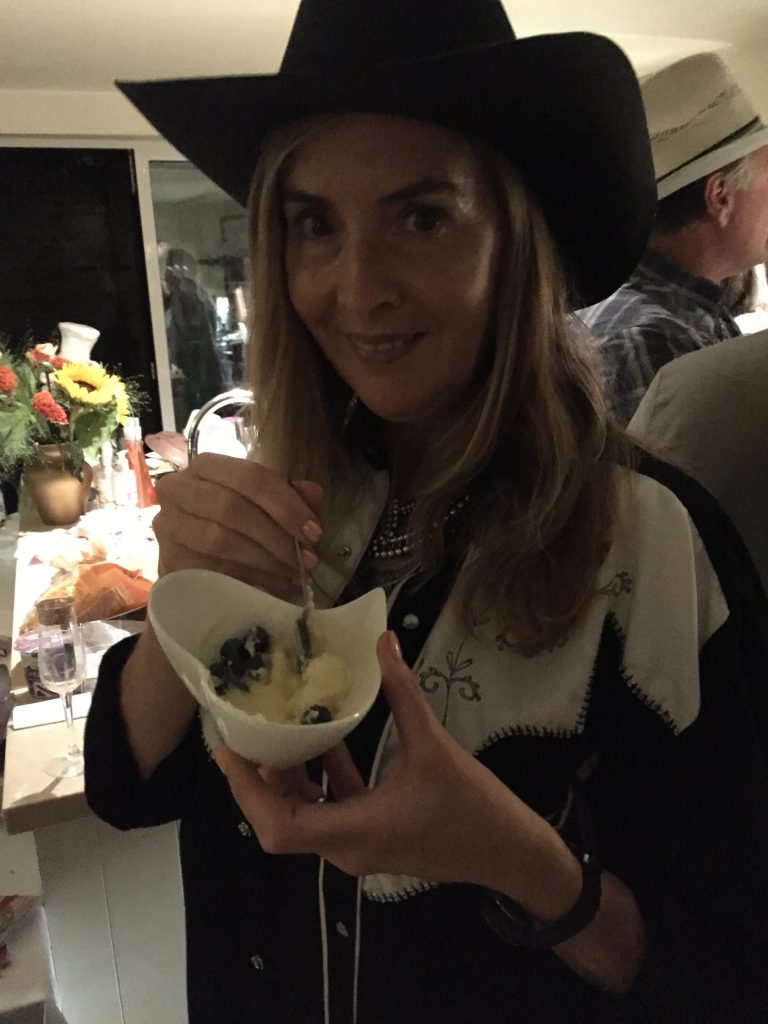 Here is Becky again, tucking in to some of Ida Lupino’s Lemon Mousse made by Battenburg Belle – report soon from BB 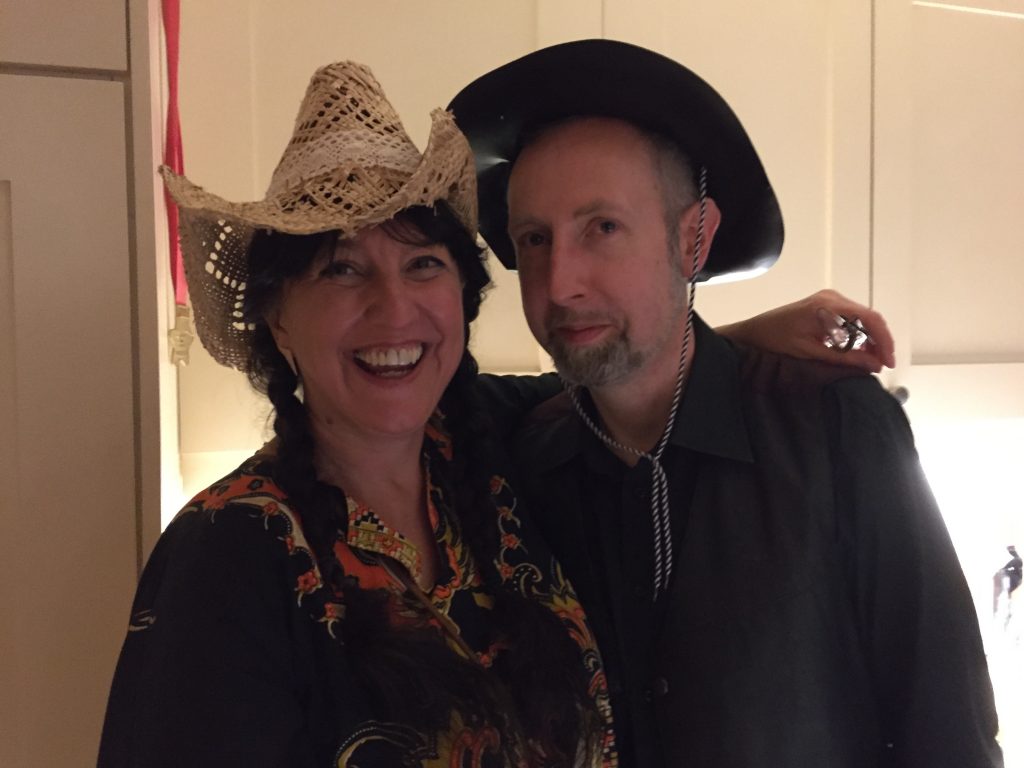 Me with my favourite cowboy… 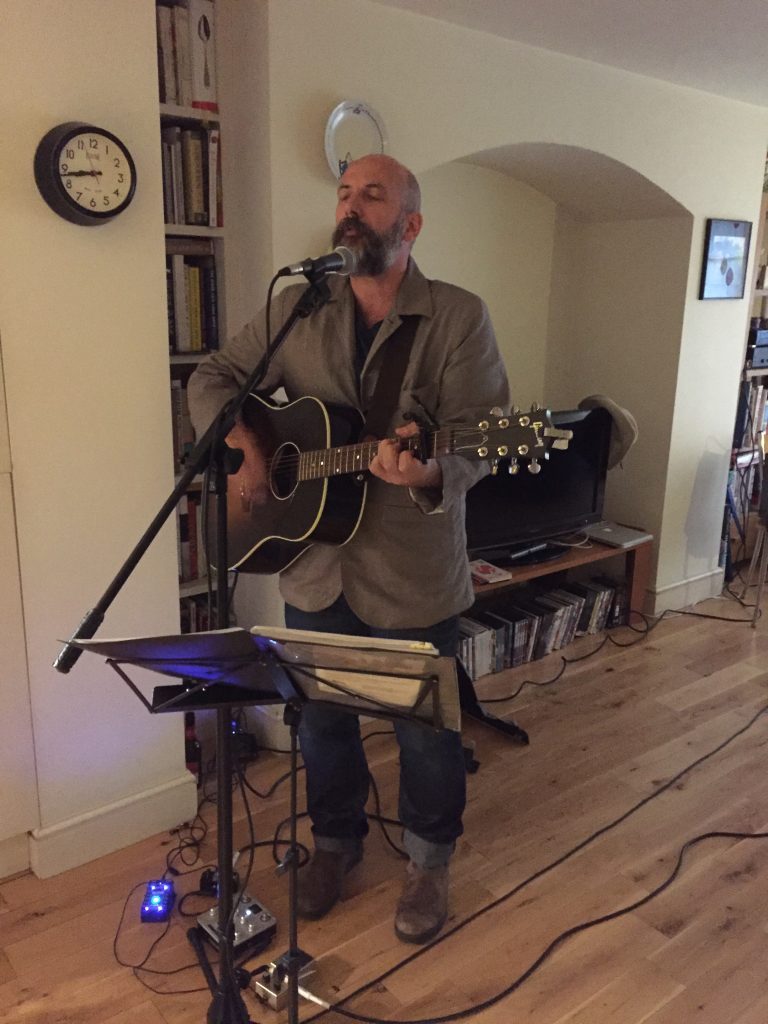 Davie entertained us with some wonderful cowboy ditties

As you can probably see from the few pics I took, it was a really brilliant night and what’s more, we raised £260 for Youth Music – it was so much fun.  Thank you Greg for organising this fabulous international cook-along and thank you BB for hosting the hoedown at the Nunnery!  I will post links to other blog posts from my fellow #CowboyDayCookalong participants as they come in right at the bottom of this post.

Roll on next National Day of the Cowboy, when I might make this again, with baking powder this time…

Hoyt Axton played a cowboy in the film Smokey, which I haven’t seen but sounds good… 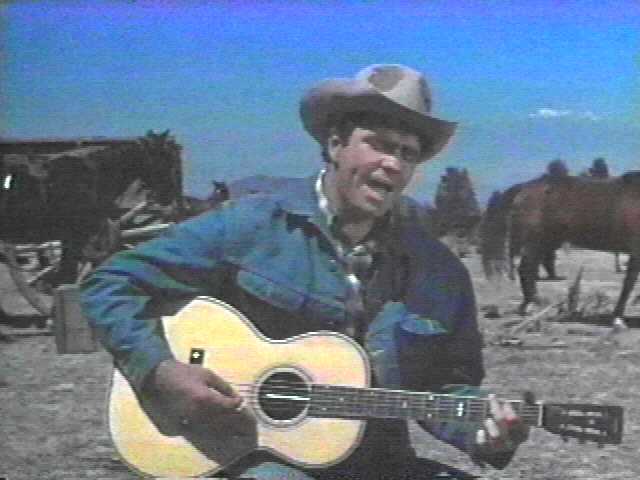 He was a singer as well as an actor, and looks like he was a bit of a cowboy in real life in his early days too… 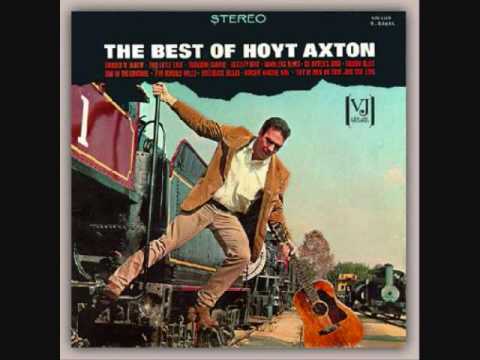