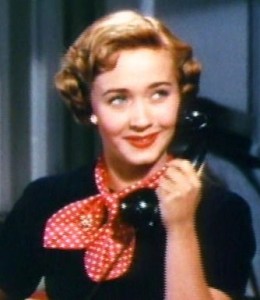 “We need to ditch the idea that there is any value
in the strong and silent man
being in any way attractive.
Being silent isn’t being strong, it’s being a victim.”
Well Jane sure was a cutie, both in looks and attitude. Interesting theory she has there, I’m going to mull that one over.

The salmon was quite a success. Sidney said it was “very fresh on the palate” – ooh la la. But what, I wonder, makes it “barbecued”? It was baked in the oven in a tomato sauce, it never made it out of the house and on to a barbecue. No men in aprons wielding metal tools were involved. I guess barbecued meant something different in 1949 America than it does in 2009 Britain.

I’m a bit preoccupied with the result of a freak accident this morning. I broke one of my front teeth clean in two by knocking it on the corner of a cupboard door. Bizarrely my 4 hour round trip to the dentist and £615 bill has left me feeling very calm and philosophical. There wasn’t even any sedatives involved, how unnerving.