Here in the UK, when we think of meatloaf we think of this fella rather than the foodstuff. 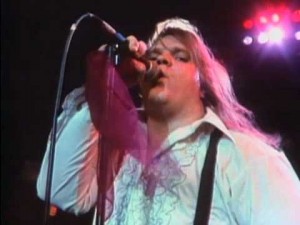 As Mr Rathbone put it last night “In the 60s and 70s, with our kind of background, there is no way you would ever encounter meatloaf”. I don’t think I ate any until 2006 when I made the absolutely delicious Rhonda Fleming’s Hollywood Ham Loaf. Now I absolutely love meatloaf and Jayne’s was DIVINE. 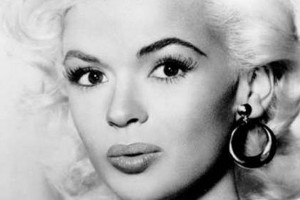 My massive decluttering project has unearthed some film star recipes I’d totally forgotten about. I have a spreadsheet where I enter recipes I find, it looks like this… 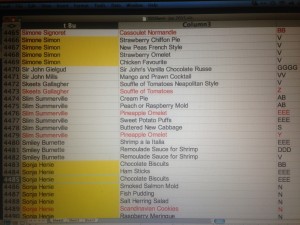 The stars highlighted in yellow were originally destined for the Silver Screen Suppers book, the recipes highlighted in red are ones I’ve cooked. It’s lovely looking at a little snapshot like this as it takes me back to probably the most complicated film star dish I’ve ever made, Simone Signoret’s Cassoulet Normandie (terrific!), some of the nicest looking biscuits you can make, Sonja Henie’s Scandinavian Cookies and one of the oddest movie star recipes I’ve tried, Slim Summerville’s Pineapple Omelet.   The Skeets Gallagher Souffle of Tomatoes I had absolutely no recollection of making, then I read the post and memories of my holiday with Mike and Margaret-Mary all came flooding back.

The running total of recipes on the spreadsheet is currently 5869 and I use it a lot. When I want to make something by a particular star, or when I’m working on something for my Eatdrinkfilms column it’s a real boon. I’m currently writing about cherries, so a quick search of the spreadsheet has furnished me with lots of cherry recipes to choose from. 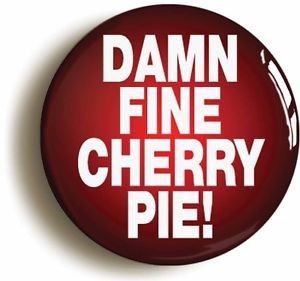 However, my archivist brain is bothered by the fact that the spreadsheet isn’t complete. I know that I still have quite a few books containing recipes that haven’t been popped on the sheet. Including this one from Jayne. When I re-organised my books earlier this month I almost gave this book to the charity shop as I thought it was just about cooking in Shakespeare’s day. But then, incongruously, there are also recipes by famous folk that have nothing to do with the Bard of Avon. 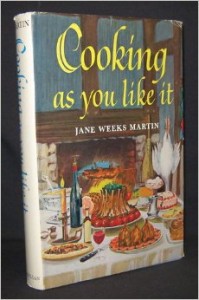 All this to say that I must go through my lovely newly organised bookshelf and get the spreadsheet up to date. Who knows what treasures I’ve forgotten about? 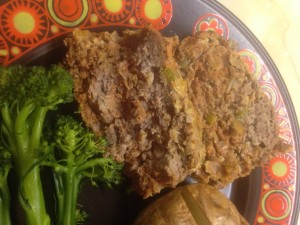 Melt the butter in a skillet [frying pan], sauté the onions and celery 10 minutes. Mix the sautéed vegetables with the beef, sausage meat, eggs, tomato paste, mushrooms, salt, marjoram, savory and 2 tablespoons of the A.1. Sauce.

Form into a loaf and place in a greased loaf pan or baking dish. Bake in a 350 degrees oven [180 celsius, gas mark 4] for 50 minutes. Brush the top of the loaf with the remaining A1-Sauce and bake 10 minutes longer.

I am lucky, my friend Heather brings me A.1. Sauce back every time she goes to the States as we can’t get it here in the UK. I think the closest equivalent we’d have here would be some kind of runny barbecue sauce. I’m going to experiment as this recipe used the last of my A.1.

Also I have never seen savory here in the UK, and I’ve hunted for it. So I used thyme instead and it was GOOD.

I couldn’t get to the butcher yesterday and so had to do my meat shop at Sainsbury’s.   No sausagemeat – “only at Christmas” said the girl at the meat counter. So I bought a pack of 6 Lincolnshire sausages and peeled off the skins. Then I mashed up the sausagemeat with the beef mince using my hands, squidging it all together before I added the other ingredients.  This is how it looked when everything was in… 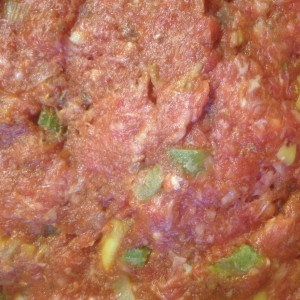 I used a drained 290g can of mushrooms which was about 150g so a bit more than Jayne suggested. And that’s it. I will do this one again, exactly as above. It made TWO massive meatloafs so one is in the freezer. If you’ve only got one loaf tin, you could halve the recipe I guess, or if you are cooking for a crowd, just form it into a massive loaf in a roasting tin. Quite a lot of liquid comes out during cooking… Mmmmmmmmmmeatloaf!