Surprise hit of the evening.  Tortilla chips with potted ham and cheese and gherkins.  Here they are just about to go in the oven: 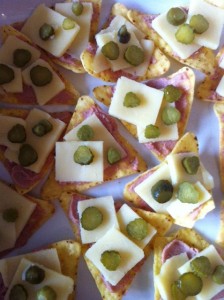 There was much fun in the kitchen making these as we imagined Joan INSISTING on perfectly shaped chips and going nuts if one of them broke while her helpers were spreading on the potted ham.  We made an executive decision to put the ham on, then the cheese, then the gherkins.  Mr R said, “The cheese will sit on the ham better than it will on a gherkin I would think.” Indeed. 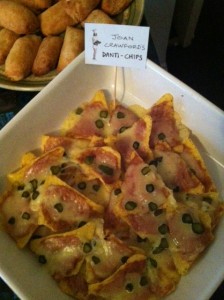 Later when we brought them out I loved this exchange:

Lawrence: “Are they just nachos?” 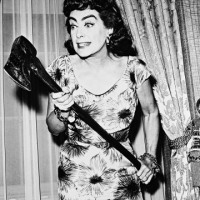