Photos are coming in thick and fast from all around the world of Joan themed dinner parties and I am just so thrilled!  I’ve had pix from Greece, Australia, the US of A, the UAE, Devon, Cornwall, Walthamstow, round the corner in Muswell Hill and beyond!

A preview of things to come, this fellow, known as “Alfonse” is to be found at my folks place in Suffolk…  This was him last night. 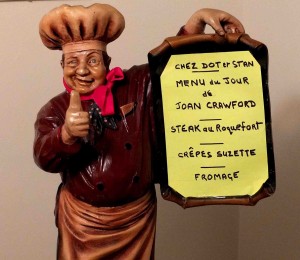 I’ll be posting photo collections of the Cosmo cocktails, the Danti-Chips, the Steak and the Crepes Suzette from all around the world over the next week or so.   There are some absolute corkers! 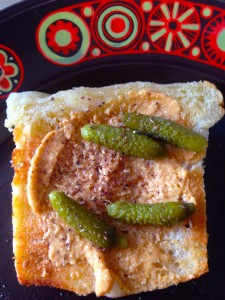 I spent most of the day shopping for supplies then pottering around in the kitchen getting prepared so when Mr R arrived at 4pm to help with a bottle of fizz in hand, I was ready to start celebrations.

We made two kinds of Danti-Chips, one more or less exactly to Joan’s recipe with ham and chicken paste (no potted ham around the place), cheese and gherkins.  The other Mr R created (being gherkin averse) with mackerel pate, cheese and little bits of roasted red pepper from a jar.  Both were delicious.  He’d bought loads of booze including a Cotes de Rhone which he rechristened a Cotes de Jhoan…  I think my dad would appreciate that! 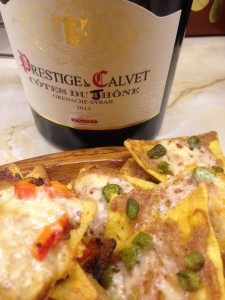 Our guests Lucy and Greg arrived out of the rain just as these came out of the oven so we rustled them up a Joan Crawford Cosmo immediately and we started celebrating in earnest.  Lucy and Greg were instrumental in me getting the Joan book published.  Greg’s motto is “just get it done”!  Which you can’t really argue with.  I resolved to get this book done when we were all lounging around in Blenheim Palace gardens earlier this year in March.  Unbelievably, I have actually “got it done”.  I love folks who have that “just get it done” attitude.  Yes.  Why not?

They both had a peruse of the book and we made lots of toasts to Joan. 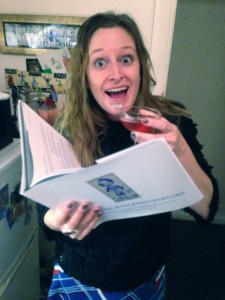 Lucy made the coleslaw which I have written about here, and we had this and new potatoes and broccoli with Joan’s legendary meat loaf.  Oh YUM.  Veal, sirloin steak and sausagemeat all from the progressive trance loving Morley Butchers in Crouch End mashed up with an onion, a green pepper, Worcestershire sauce, A1 sauce and Joan’s favourite condiment, Lawry’s Seasoned Salt.  It was utterly delicious.  I might put slightly less Lawry’s in it next time, or possibly make my own version of Lawry’s.  As mentioned before, I keep my spices for around a million years, and my Lawry’s is pretty ancient as I only ever use it for Joan’s meatloaf or her Pork Chops with Fried Apple Rings.  I made half of Joan’s recipe (which she says serves 10) and the four of us almost scoffed the lot between us.  It was GOOD.  I have an end piece left (no egg) for my din dins tomorrow night… 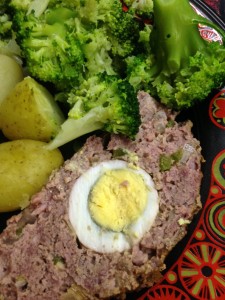 We had a power cut as our celebratory excitement overloaded the system, but luckily my wind-up torch was where it should have been, which in the chaos of my flat is nothing short of miraculous.  I still can’t seem to find the right technique for making hard boiled eggs that don’t have that green line between the yolk and the white…  My mum and I were discussing this recently.  Can anyone help?

I had fully intended making Joan’s Crepes Suzette for pudding but was a bit stinko by this time.  We had a vote.  Crepes Suzette and no Joan Crawford movie?  Or some chocolate and a Joan movie?  The latter won.  Luckily, the lovely Simon Wright had sent me a wondrous batch of Vanini chocolate to try. 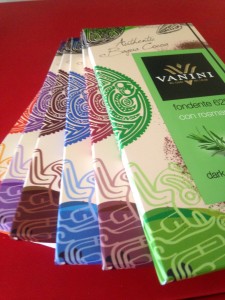 There was another vote about which one to try first and the milk chocolate with Sicilian sea salt one got the most votes.  The MAUVE one… 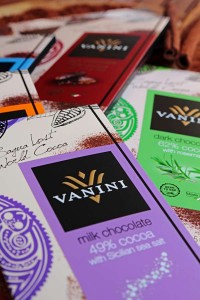 Greg said this was the “best chocolate he’d ever eaten” and Mr Rathbone agreed.  The pair of them then promptly fell asleep leaving me and Lucy to watch Joan in Harriet Craig. We sneaked an extra piece each while they snoozed. 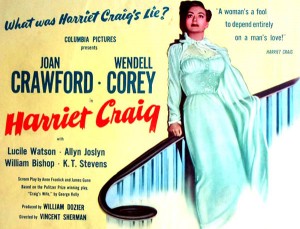 That chocolate was phenomenal.  I’m going to have a piece right now to round off my Joan Crawford weekend celebration. 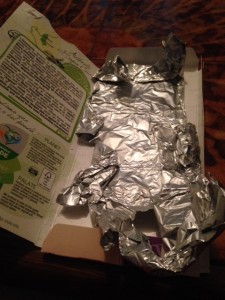