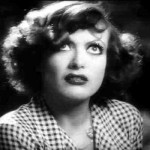 This is my favourite Joan Crawford “look” and if I had the guts I’d have my hair like this.  I’d wear the same kind of trashy outfits she wears in “Rain” too, she looked superb even though she was playing a woman of ill repute.  Her full-on lips caused quite a sensation in the fan magazines of the day.  I might just do a Crawford style make-up for work tomorrow to see if anyone comments.  I spent a couple of hours sorting out all my many bags of cosmetics at the weekend and there are plenty of claggy red lipsticks and super shiny clear lip glosses hanging around still.

I had a nice spinster steak this evening as there was still some of Joan’s roquefort and mustard sauce left. Yum yum.  Due to the fact there is a Tube strike in London today I took a different route home and bought my steak from the Co-op.  It was half the price of the ones I bought for Charley and me from Tescos at the weekend but I must say, it was only half as nice too.  Sometimes when it comes to steak you got to fork out the extra dollars.

Talking of which, I’m feeling the influence of my sister Clara on my spending pixie at the moment.  Firstly I mentioned that I was after a new frock for Grace’s wedding.  By return post there was a link to the perfect 1940s number on ebay.  I bid on it (much more than I would spend on something I’d seen in a shop) and have won it.  I hope it’s as nice as it looks in the pictures!  Secondly I told her about a 1930s quilted bed jacket I’d seen in Camden a few days before.  She said if I was still thinking about it I should buy it.  Now don’t get me wrong, I’m not going to be wearing such a garment should I ever get a gentleman caller, but as I do so much writing in bed, and the arctic winter is fast approaching I rather like the idea of a silky puffed sleeved jacket to write in.  Hmm.  It’s £35.  What would Joan do?!