It must be wayyyyyyyyyyyyyyy past my bedtime because Janice Long is on the radio.  For young folks, or my chums who are not UK based, this is basically the equivalent of going to a really fabulous party, leaving, and then finding out that it’s light outside because it is MORNING. 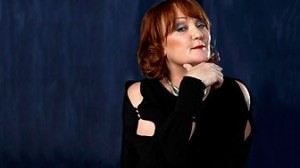 I am not going to disrespect Janice for several reasons.

1 – she is currently playing one of my guilty pleasures – Marc Almond doing Jacky.

2 – despite all the odds, she is still doing what she loves to do, on a national radio station.

3 – she starts her official working day at midnight

I’ve had the day off work today to finish the “Cooking With Joan Crawford Cookbook” – have I done it?  I sort of think so…  There was a moment when my brain nearly exploded when I had to try and work out how much UNWHIPPED whipping cream in ml would whip up to a quarter of a cup of whipped cream.  If anyone has ANY idea please email me immediately. 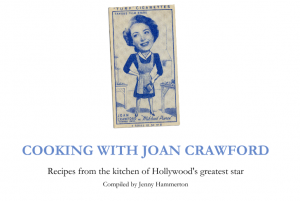 BUT, I’m still on my mental cooking schedule  GOD I wish I’d taken photos of all these things when I made them first time around.  So here’s Joan’s Cheese and Bean Casserole. I was really hungry so couldn’t muck about with taking a good photo of this one…. 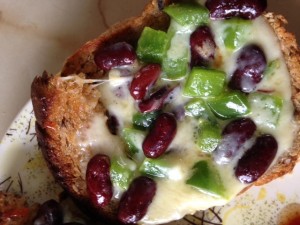 I don’t own a chafing dish (I would like one please Santa) and I wasn’t having a Joan style buffet party so 4 large cups of kidney beans were not required.  I made a single person’s version of Joan’s recipe and in a devil may care way bunged it on some toast.  So effectively it became Joan’s Welsh Rabbit with Kidney Beans.  I have a nicer photo of this that I think was taken ages ago with my proper camera.  So anyhow, you get the idea.  If you are having a buffet supper, bung it in your chafing dish and call it a casserole.  If you are having a little singleton’s snack, bung it on some toast and call it Welsh Rabbit. 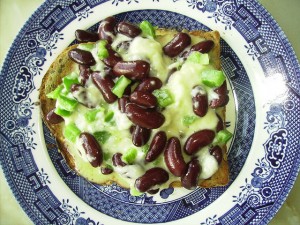 I am thinking that for some people a combination of melted cheese, green pepper and kidney beans with a bit of Tabasco would not appeal, but I really like it.  Thanks Joan!

I’m getting a bit playful now when looking for pictures of Joan online.  Here’s one I’ve never seen before which I found by searching for “joan crawford kidney beans”.  I knew Joan was into woolcraft, but this is the earliest pic I’ve seen of her doing something wooly.  Looks suspiciously like CROCHET to me… 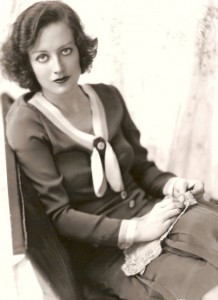