I had a day off work yesterday to finish the Cooking With Joan Crawford book.  Is it finished?  Sort of.  MAN it’s been a lot of work.  I have a renewed admiration for all cookbook writers and Frank DeCaro in particular.  Lord only knows how long it took for him to write the Dead Celebrity Cookbook and Christmas in Tinseltown.  My head is reeling.

I took a break in the evening to have Joan’s salad which had be marinating (or is it marinading?) for a few hours in the fridge.  Delicious.  It reminded me of being a student, and a veggie.  I always put kidney beans in my salads then and I’d forgotten how much I liked them.  This is one of Joan’s recipes that doesn’t include quantities so I basically used half a small tin of kidney beans, about 1/3 of a green bell pepper, a stick of celery, half a small red onion and half a small red chili.  The marinade was red wine vinegar, salt and Tabasco. Delicious.  I ate the lot (greedy). 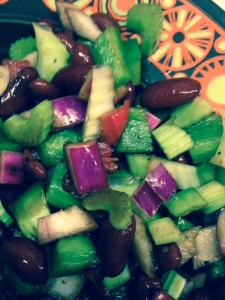 Out of the blue yesterday I received a package from Seasoned Pioneers – no idea how they had my address – with some freebies inside.  Smoked Garlic Powder. Shawarma Seasoning and Chermoula Spice Blend.  Mmmmmmmmmmmmmm.  I found a chicken leg in the frozen archives, rubbed it all over with olive oil and some of the Chermoula Spice Blend bunged it in the oven to roast and it was very lovely indeed. 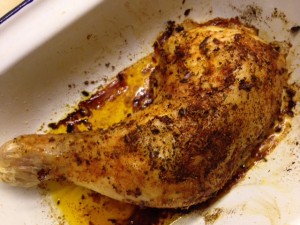 It went really well with Joan’s salad. In her book My Way of Life she said that she often served this salad with chicken or ham. 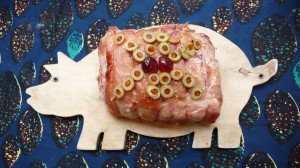 HAM.  I’ve got a month of Sunday dinner dates coming up, most of whichare at my house and I’ll be cooking for.  I really feel like making a Vincent Price Ham in a Common Crust for one of those.  ARG.  I am hungry.

Here’s a picture of Joan I’ve never seen before and obviously I’m trying to work out what she is eating.  Celery.  Egg mayonnaise type thing?  Artichoke heart?  I think this is from The Bride Wore Red so if anyone has it handy and this is a scene from the film rather than Joan taking a break in the commisary in costume (!) I’d love to know… 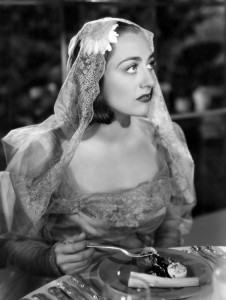 I saw Joan’s iconic dress from The Bride Wore Red at the Hollywood Costume exhibition at the V&A – it was amazing. 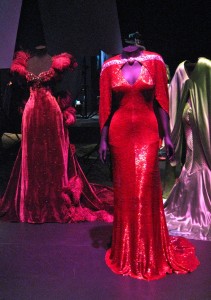 This photo is from Brian Sibley’s blog and I hope that he won’t mind my pilfering it.  He wrote a great article about the exhibition which is here…   There is lots of other lovely film related stuff on his blog too so I recommend a visit.