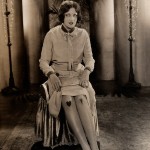 I wish they still made stockings like this.  My knees could do with some big old hearts to cover up the bruises got from falling over in the street last week.  It was quite a spectacular one as I was holding a large open umbrella above my head.  Mary Poppins I wasn’t…

The ladies of the book group came over last night for a screening of Mildred Pierce.  Much fun was had and (as usual) much wine was drunk.  Paulette and I have been texting each other this morning comparing hangovers.  I suggested we have a codeword to use when asked the following question, “shall I open another bottle?”  She suggested the no nonsense response, “NO!”  As usual Paulette speaks a lot of sense.

To accompany the buckets of wine we drank we had various nibbly things on my little 1970s sword shaped cocktail sticks. These included  Joan’s very own invention – two different types of salami folded into little fan shapes with a bit of mustard in between and topped with a cocktail onion.  Yum!  I’ll be making more of these tonight for Olivier’s Oscars party.

The ladies do like to catch up on my romantic life and there was much discussion about Mr Hi-Fi.  General approval of this particular fellow abounds, not just from the book group but also from those who met him at my 45rpm party.  This is all very well, and I do agree that he might be an appropriate recipient of my affections, but the fact is that since Monday there has been tumbleweed.  Maybe I should learn this song on the ukulele and every time I am tempted to put myself out of my misery and send a text I could keep my fingers busy with the uke instead.