If I am ever asked if there is anything I don’t eat, I usually say, “I’m a bit weird about mushrooms, aubergines and shellfish but everything else is fine”.  If I’d been around in the 1930s and 1940s I would have defintely added “and vegetables set in aspic”.

This is just a thing they “did” back then and it’s not a thing we tend to “do” now.  And there is probably a reason for that…

Anyhow, this is how Joan’s Veal Mousse turned out. 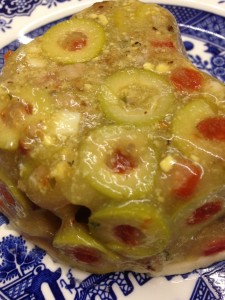 Shall we draw a veil over it?  Yes. 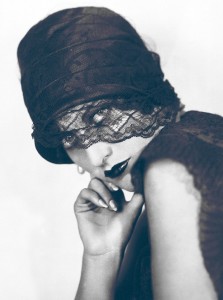 If you make this, I would suggest that to unmould it once set, you have a bowl of hot water to dip the container into to loosen it a bit, then gently run a knife around the edge of the container trying not to disturb the olives too much.

I used ground veal that I had left over from Joan’s Meat Loaf which I fried up in a pan before mixing it up with the other ingredients.

It actually tasted nice (the veal was very tasty), it’s just the texture I can’t get to grips with…

Recipe is to be found in the Cooking With Joan Crawford cookbook.  Do let me know if you try it!