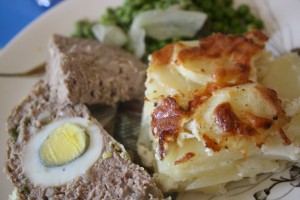 Oh yum yum Joan Crawford did us proud today.  We had JC Cheese Straws, JC Salami Sandwiches and JC Peanut Butter and Bacon Canapes.  Main course was her legendary Meatloaf (delicious) with her own recipe for Green Peas (cooked with lettuce and spring onions) and some Vincent Price Potatoes Dauphinoise.  Dessert was the very, very bizarre JC Floating Islands. 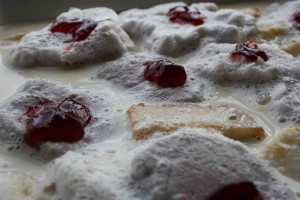 I ran a competition a while back for my newsletter subscribers, the winners came to lunch with their plus ones so it was me, Geoff & Douglas, Julie & Darren.  We had such a fab time.  Even though each person only knew a maximum of 3 people (and Darren only knew Julie) it was a very merry lunch.  Oh, we started with a bucket full of Joan Crawford Cocktails which helped get the party off with a swing.  I don’t know if Joan herself had anything to do with this cocktail but it is eponymous and tasty so fine by me!

I’m going to put more pix up on the Flickr site as soon as I get around to paying my subscription.  It appears that my free account is now full so I gotta pay.  I guess they have to make some money somehow so I’ll have to cough up.

Joan’s Meatloaf recipe is around on the internet if you fancy trying it but I would seriously recommend doing half the amount Joan suggests.  If I’d made the full recipe, the veal, sausage meat and sirloin would have cost £60!  As it was, with half the amount I fed 5 with some to spare for my din-dins tomorrow.  I keep reading on the internet about how marvelous a sandwich made with left over meatloaf is so maybe I will try it.  There are two versions of the Meatloaf, one was in Joan’s stupendous book, “My Way of Life” and the other was in a book published by the “Motion Picture Mothers” organisation.  In the latter Joan is more specific about amounts and she includes Lawry’s Seasoned Salt.  I do wonder if she was paid to endorse that product as it’s also in her Pork Chops With Fried Apple Rings recipe…

For ATMOS Douglas brought along his Baby Jane poster which we had on display throughout.  Watching the film with him was great as he’s an enormous fan and we laughed out loud at the same bits (especially when Jane imitates Blanche on the telephone). 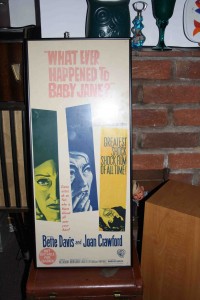 It was a special and lovely day.  These Silver Screen Sundays are just gorgeous, so much fun and worth all the running around for supplies, planning and cooking.  Who shall I invite for October?  And what film shall I do?

I’m now relaxing to the dulcet tones of my Radiogram which appears to have mended itself again.  Just love Sunday nights on Radio 2.  It is my last moment of calm before 3 days of mounting stress about two big events this week.  First, a big work thing on Thursday morning, and second an interview for the BBC with my Shellac Sisters for a programme about Hollywood musicals on Thursday afternoon.  Eeek.  I gotta swot for both…