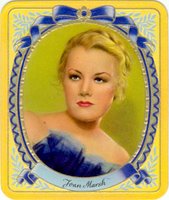 Aha! A new spirit of optimism is upon me after a weekend at the seaside. Life is pretty damn good at the moment, not least because I have a new “Favorite Recipes of the Famous Movie Stars” book produced by the Milwaukee Gas Light Co in 1934 and autographed by Agnes Ayers!

Friday night was spent preparing for my DJ session on Saturday night, selecting 78s and testing my wind-up. Managed to squeeze in a Silver Screen Suppers number though, alongside all the jigging around to “Prairie Romeo”, “She’s a Latin From Manhattan” and the like. A chicken salad that shared most of its ingredients with Mary Pickford’s except GRAPES were the fruit rather than pineapple. Also a nice link between the two recipes is the fact that Joan was the daughter of Mary’s favourite cinematographer Charles Rosher and the girls were in several films together.

I have to say that this project is an eye opener for a fruit-phobic like me. Ordinarily I avoid all fruit unless it is sweety shaped (grapes, blueberries and strawberries fall into this category) but I am actually loving the fruit and salad combinations that I am finding amongst these fab recipes. As I am on a 6 week health regime in preparation for my trip to the land of the long white cloud there may be more salads on the way…