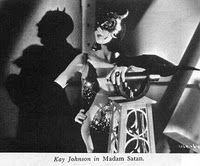 “As long as they pay me my salary, they can give me a broom and I’ll sweep the stage. I don’t give a damn. I want the money…”
A refreshinghly honest opinion from a star of the silent era – found in her private diaries though, not published in a fan mag. Swearing no less!*
* Note: thank you Despina Veneti for dropping by and pointing out that this quote is from the diary of Kay Francis rather than Kay Johnson – I don’t know what I was thinking!

Well on Sunday I awaited a visit from the Panther. I trapsed up and down St John’s Wood on various small errands getting all the bits and pieces needed for a late lunch. The Tesco Metro is a very strange beast indeed. You can’t buy walnuts in there but you CAN buy pre-cooked sweet pastry crusts. This is just as well when you intend making something that requires a pie crust but are living in a serviced apartment which is somewhat short on cooking implements (nothing to cook a pie in that’s for sure).

I followed Kay’s recipe for Chocolate Pie as closely as I could with one eye on COLUMBO which co-incidentally had Anne Baxter as guest star. Try as I might though, I couldn’t get all the egg whites to fold in properly and the damn (Kay’s word not mine) chocolatey soup just would not set. Perhaps it was a metaphor for the whole day. About 4pm I got stood up by the Panther and after a crying jag I realised that I had been BORED all day and was not about to be BORED all evening so texted the chaw-bacon. Am I some kind of sad sap weepy needy character in a bad b-movie that gets swept aside by some strong siren for being such a bubblehead? I don’t know but I don’t think so. Life is too short to be bored.

The pie got put in the freezer to see if that improved things. I forgot to take it out later so who knows?