I got a tip-off from my favourite food blog Dinner is Served 1972 that the Liberace biopic starring Michael Douglas was a humdinger.  Yinzerella and her mom watched it on HBO celebrating the event with kaftans and a Liberace cocktail. 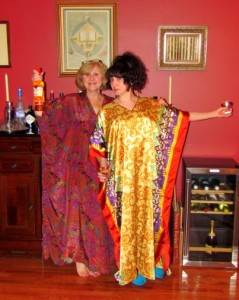 Here in the UK we are VERY lucky as Behind the Candelabra got a cinema release and I got two invitations to go and see it.  The first from Heather who as usual when organising a social event can corral about 1,000 people to attend.  Alas, I couldn’t go to the movie but I damn sure managed to get to the pre-cinema cocktail session.  I’d directed Heather to Yinzerella’s blog and hence the recipe for a Liberace cocktail.

Light on fire. Let burn. Blow out. Cool for a few seconds. Shoot. 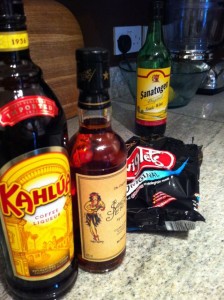 Heather modified the recipe a bit with what she had to hand (the Sanatogen wasn’t in the cocktail, that’s just H’s new drink of choice – heated up in the microwave) and we had suitable salty snacks like Twiglets to accompany it.  I don’t think we can get Bacardi 151 here in the UK so H used Sailor Jerry which is DIVINE.  I don’t remember it being set on fire, but I drank it anyhow and it was fab. 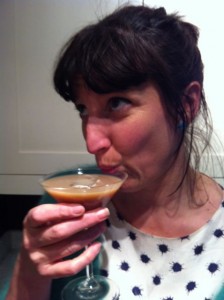 The second chance I got to see it was with Mr R and I dressed accordingly: 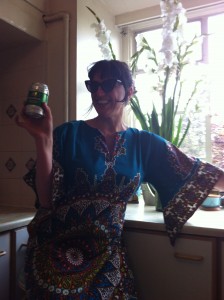 We didn’t have a Liberace cocktail but we sure enjoyed the movie.  I would highly recommended it, and what’s more, I didn’t fall asleep during the film – almost unheard of! 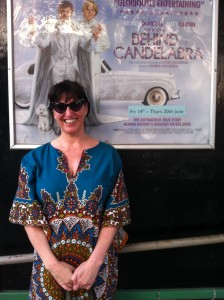 There will be more Liberace recipes to come – I have a whole heap of them in the collection, and of course, he published his own cookbook too.  I imagine prices for an original copy will go through the roof for a while now but when Liberace-mania has calmed down I’ll get one.  As he said in the movie, he loved to cook.  I will try and get hold of “The Loved One” on DVD as I adore Liberace in this movie playing Mr Starker… 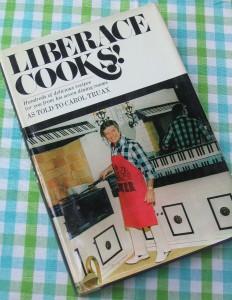