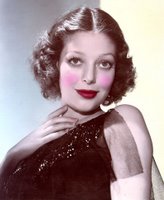 “As soon as I get home from a day of work, I bathe, brush my hair, put on fresh makeup, and slip into a hostess gown.”

On Saturday night the Black Panther came over and cooked me dinner on the tub. I should probably explain that he is not a member of the 1960s political group that presented “the greatest threat to the internal security of the United States” but rather a hunk from Sierra Leone I am currently canoodling with.

I decided to make a pudding and as I was reliant on the strange selection of goods offered by Mr Riverside I selected Loretta Young’s Peach Dessert which turned out to be a very strange thing indeed. I have no idea how I could have prevented the apricots (no peaches at Mr R’s) from falling out of the bottom of the muffins when taking them out of the tins. I suppose it could be to do with the fact that I didn’t know what one of the ingredients actually was. Shortening? What is this shortening? Anyhow, they turned out to be tasty little portions of cakey type comestibles with apricots and almonds on the side.

We ate them in bed with some custard. Champion!