Hmm.  This looked cute in my new punchbowl but would probably be more of a summer picnic drink than a fully fueled alcoholic party drink.  Guests kept asking if there was any alcohol in it – yes!  Two bottles of dessert wine and half a bottle of raspberry liquor!  It didn’t taste very oomphy it is true – I probably put too much fizzy water in it…. 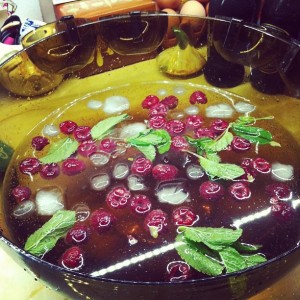 It was a kind of swanky Hollywood style ladylike drink.  And as such, I might give it another go in the summer, if I have enough dough for the Sauternes.  It’s £12.99 for a half bottle in my local supermarket so this isn’t a cheap punch to make. 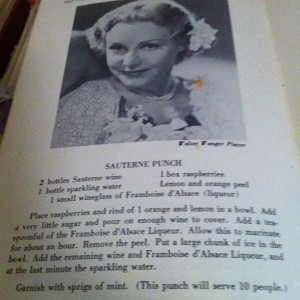 I admit, I went for a cheaper dessert wine as I am on my uppers at the mo.  But I know from making Elizabeth Taylor’s Chicken Steamed in White Wine – Sauternes is the bizniz.  I guess when you are a Hollywood star though, money is no object.  Sauternes all the way for someone like Madeleine! 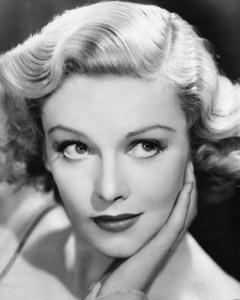 NB – Me and Mr R decided to add more of the Raspberry Liquor to oomph it up a bit so there was definitely more than a small wineglass in there.  SMALL wineglass?  Who has one of those these days?