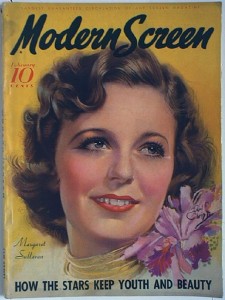 “Most actors are basically neurotic people. Terribly, terribly unhappy.
That’s one of the reasons they become actors.”

Well there is a word of warning for myself and Grace. Might help prevent a cat scrap over the handsome new rockabilly…

Margaret’s recipe stated that there would be enough cookie dough for “eighteen Hermits” and so there was. I packed some up for Ginger to take to a family lunch where they were a great success. Both Clark and Betty declared them to be delicious and Betty said that she would eat a lot of more of them if she wasn’t trying to lose a stone by next Sunday. Cyd is worried about her hips but nonetheless enjoyed them. I know what they are saying now I have just eaten one for breakfast. The calorific content of just one Hermit is probably equivalent to a big fry up.

I took most of the rest of the Hermits up to Penny at the shop. I was musing over why they were called Peanut Butter Hermits and she decided that it was because they were designed for people who lived alone and ate a lot of peanut butter.

Well I DO eat a lot of peanut butter, but by Jove I don’t live alone. Thank heavens for my wonderful housemates. We are having a barrel of fun in the Stowe and on Friday night went to a rocking Grease themed party where I won second prize for my prom frock outfit. Later I learned some legs akimbo rock chick air guitar moves from Grace who was sporting a remarkable pair of electric blue skin tight Sandy pants. Ha ha. It’s a great life.