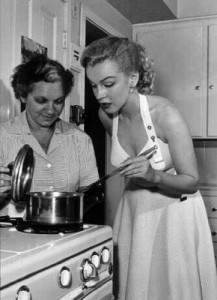 “I don’t want to make money.
I just want to be wonderful.”
Same here Marilyn.

It’s rare that I write a post without it relating to a star’s actual recipe but this week has been Marilyn week and there is still NO RECIPE. I guess Marilyn was outside the key era for film star recipes being published (1920s and 1930s) but there MUST be one out there somewhere. The call is out. If anyone knows of one, please let us know. We know from Katharine in Cardiff that Marilyn DID cook but it would be just ELEGANT if we could find one of her actual recipes.

I am off to Cardiff this weekend – very exciting. There will be a Silver Screen Suppers extravaganza on Sunday with many, many film star dishes on offer. I’m going to give a little talk about the project and hopefully score some more test cooks. The call for second round of testing should be going out this week so if you fancy having a go at one of the recipes that hopefully will make it into the book drop me a line.

Last Sunday I was invited to Paulette & Ivor’s place for a screening of Gentlemen Prefer Blondes. It was the first time Shirley (aged 9) had seen it and it was great to see her reaction to the whole shebang. The funniest moment was when Ivor said something about how his wife was just as beautiful as Marilyn and Jane. Their little angel Shirley (sitting between myself and another female guest) said, “What about these two?” pointing to us. She followed this up with the statement, “Just because you are old and withered, doesn’t mean you’re not pretty”.

I THINK that it was meant as a compliment….

I’m watching “The Seven Year Itch” and Marilyn has just gone upstairs and changed into a fabulous frock as she thinks that, “it just isn’t right to drink champagne in Matador Pants.” Ha ha! Billy Wilder was so right when he said of Monroe, “There has never been a woman with such voltage on the screen, with the exception of Garbo.” Voltage. Hm. Interesting. I think I may have to replace my fuse. I’ve been operating at low voltage lately. But birthday / Christmas season is coming up. I am going to crank it up.