The lovely Viv in Cardiff had a go at Marilyn’s Stuffing (recipe of the Month for December) for her Christmas extravaganza and reported back.  Ah, doesn’t this photo take you back to Christmas?  Is that a Christmas jumper I see before me?  That turkey looks DELICIOUS! 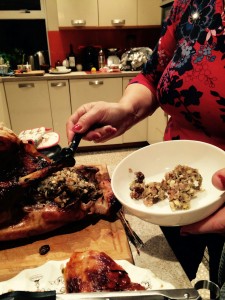 “Massive amounts! I halved it as you suggested and still had too much for a 6kg turkey. Enjoyed it though thought it a bit sweet – too heavy on the raisins. The hard-boiled eggs were bizarre and in future I would make it with raw egg as it didn’t bind well enough. I would probably also fry the onion and celery, which would help with the consistency. I ended up adding some dried porcini mushrooms soaking liquid to bind it a bit more.

I used pine nuts but would be nicer to use chestnuts. Also, I used the turkey giblets, including the neck meat, which had been cooking considerably longer to make stock for gravy.”

Here’s a photo of Viv’s stuffing, pre-stuffing, if you know what I mean… 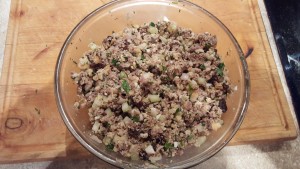 Mmm.  This has reminded me, that I have some of this in my freezer.  I might do as Viv suggests and add a beaten egg to it and then see what happens when I put it in my waffle maker.  BECAUSE, the only reason I asked work colleages for a waffle maker for my recent birthday gift was: 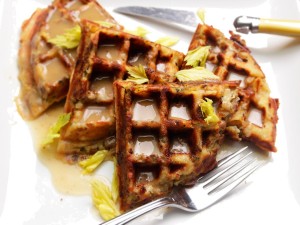 MMM, thanks for testing Marilyn’s recipe Viv, and thanks for reminding me about stuffing waffles.

Viv was my guide to all things Matzo, when I made my first ever Matzo Ball Soup – to a Groucho Marx recipe.  I’d never even seen a Matzo Ball, let alone eaten one.  Viv knows a lot about Matzos, not least the fact that Matzos with butter, apricot jam and little morsels of cheese dotted on top are utterly divine.  I now wholeheartedly agree.

Jeepers!  I am so hungry I could eat a horse! 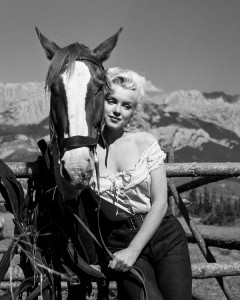