This recipe is destined for the Murder, She Cooked book as David Birney pops up in four episodes.  When interviewed by food writer Johna Blinn, David admitted that he was no great shakes in the kitchen and offered up this recipe from his wife, actress Meredith Baxter.  I wish I hadn’t googled David Birney and Meredith Baxter just now, as their seemingly perfect marriage hit the rocks in 1990 and there has been a lot of animosity since.  I’m not going to take sides though, I’m going to focus on the recipe, which was good. 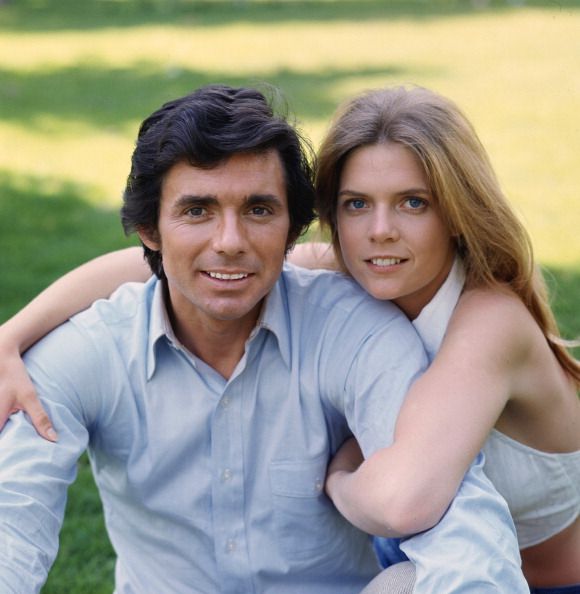 Plus, I had a hilarious conversation with my writer friend Lisa Caldwell aka The Hearing Coach last week who was bemoaning the fact that when searching for recipes online, she hates having to scroll through reams and reams of irrelevant stuff on blogs.  “Show me the sodding recipe,” she yelled, and I laughed heartily and then thought to myself, oh, actually, I am sooooooooo guilty of rambling on and not getting to the point.  So here’s the sodding recipe with some photos and notes to follow. 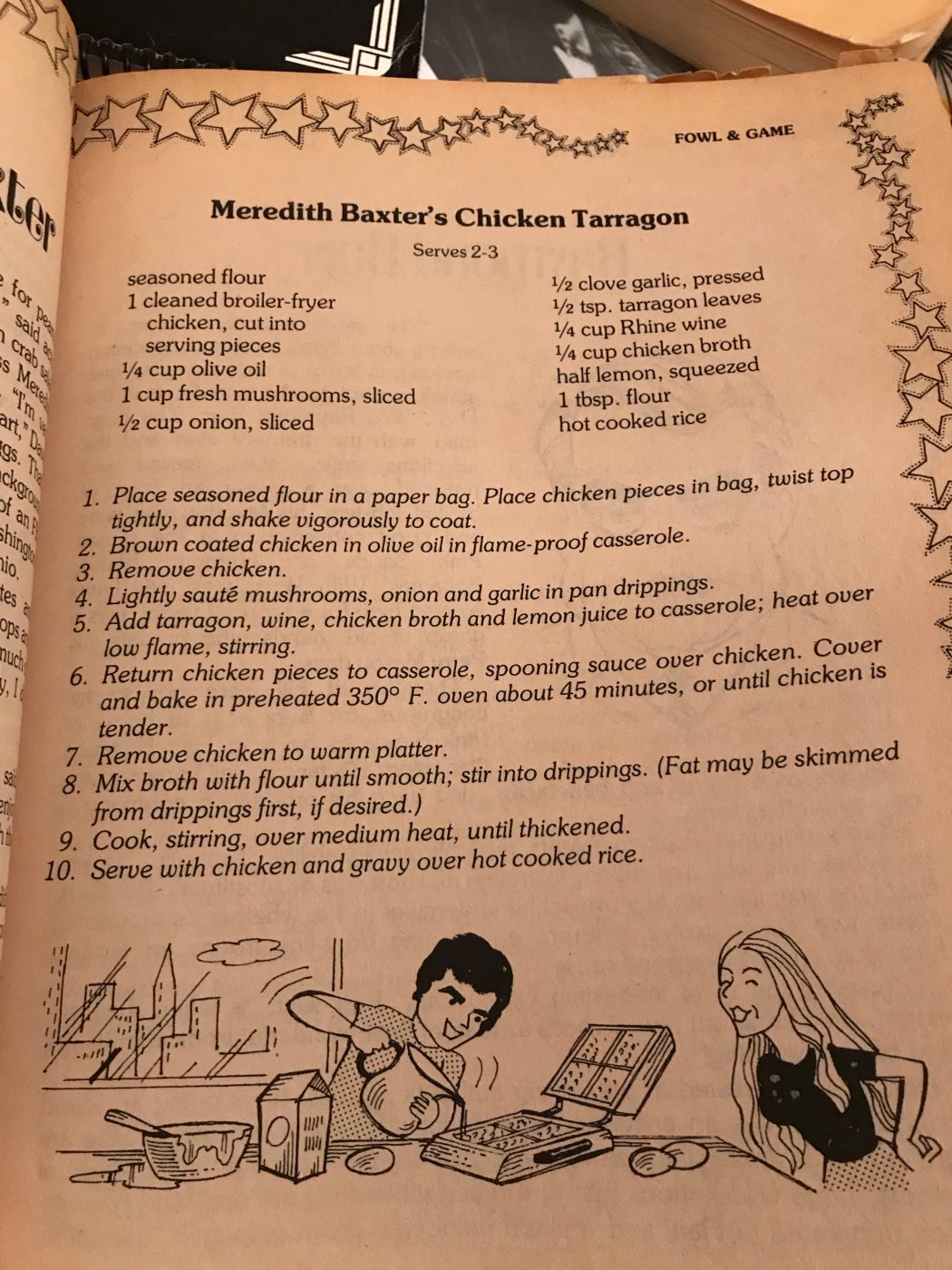 The day after I made this, I realised it was a very similar recipe to one I’d made the previous week – Carroll Baker’s Baked Chicken.  It was a slightly more elaborate preparation for a very similar result.  Me and Mr R liked the winey sauce in this version, I used Riesling. For the seasoned flour I added 1 teaspoon Lawreys Seasoned Salt to 1/3 cup of flour. This was more than enough for my chicken. 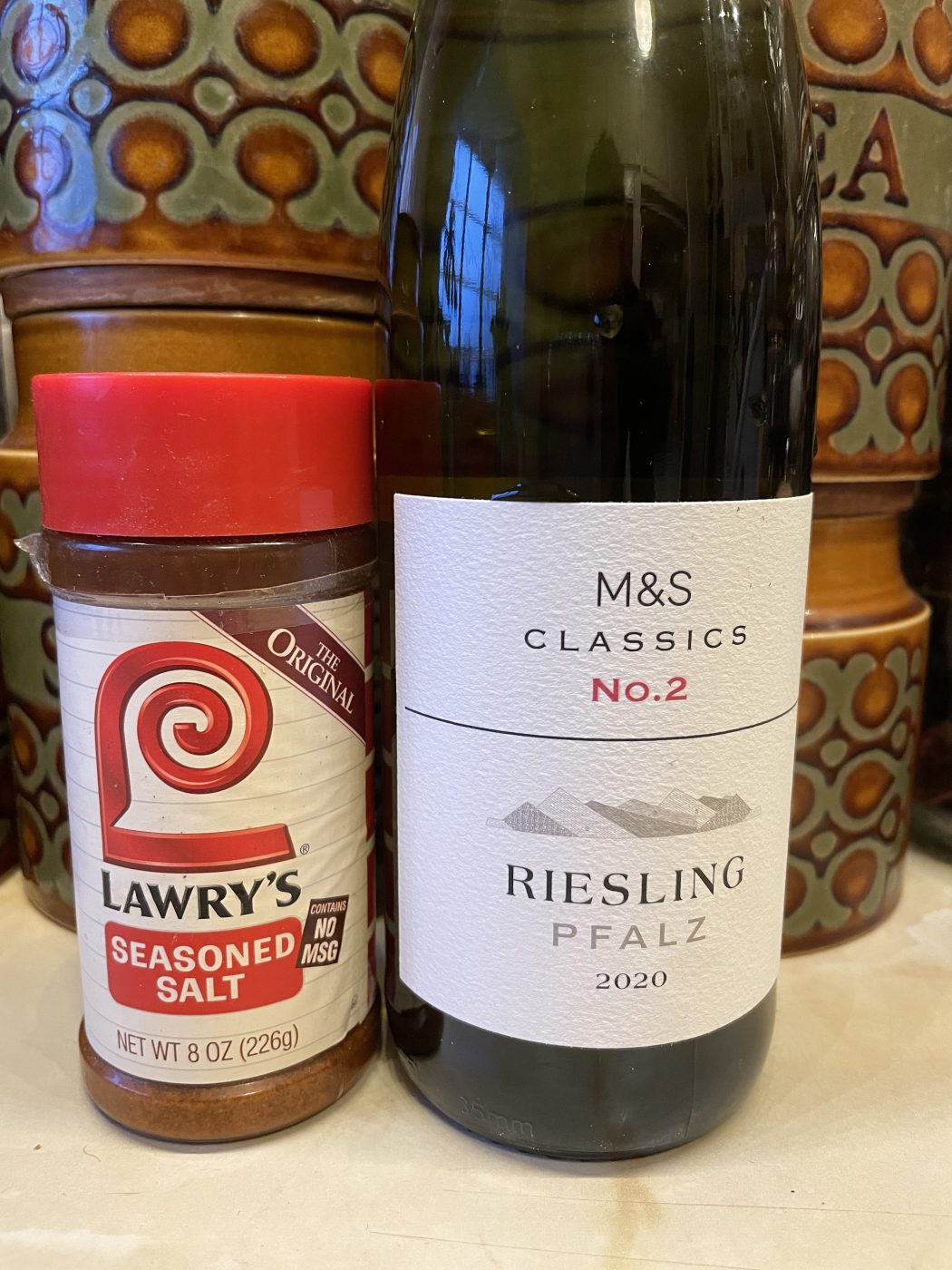 I dread to think how old that Lawry’s is.  Actually, I know how old it is because I just found this on the blog from 2013 in relation to a Joan Crawford recipe, “I have a bucket-sized container of this that I bought through t’internet for her Pork Chops with Fried Apple Rings recipe.  I think she must have been sponsored by them to product place it at some point.”

I don’t know what’s on this cracker, but if Joan made it, I’ll have it. 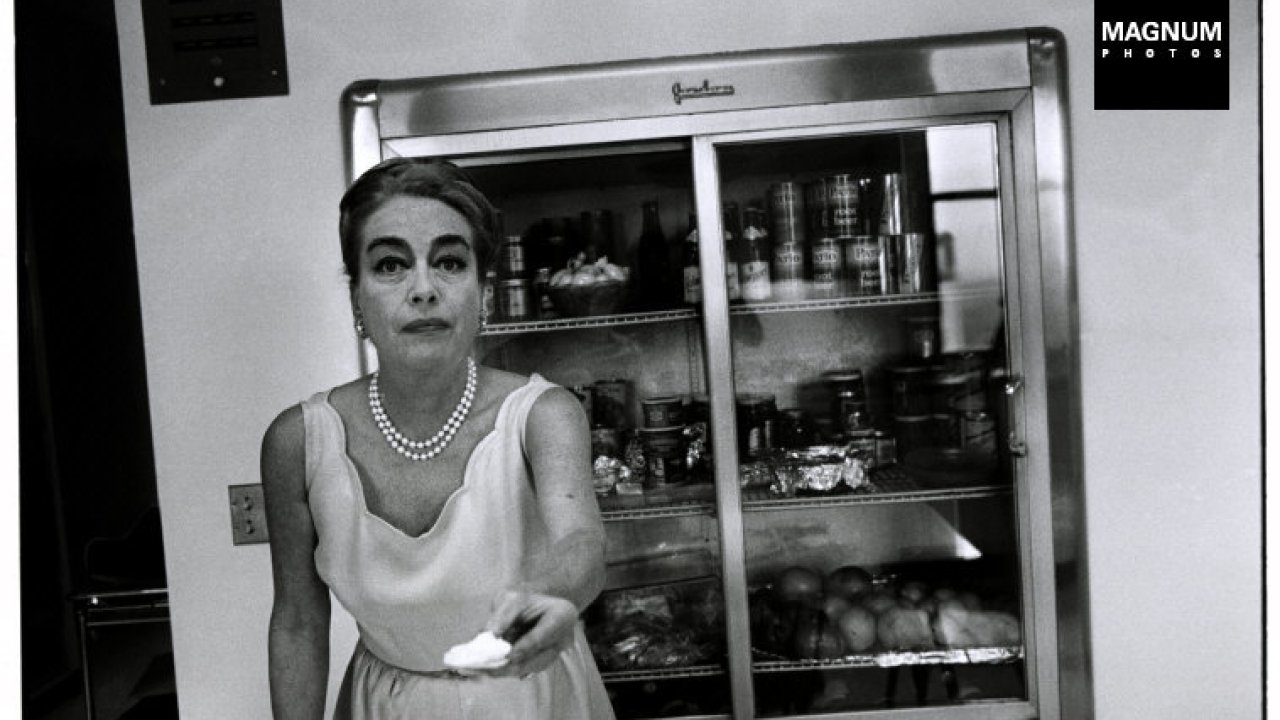 Delving further back into the archives I see that I made Joan’s Pork Chops in TWENTY TEN!  Therefore, that seasoned salt is about 12 years old and I hereby announce it to be #1 candidate in the “use it up and wear it out” project for my spice cupboard.  I am sure that many folks stick by the to use by dates on spices and condiments.  Not me!  No siree! 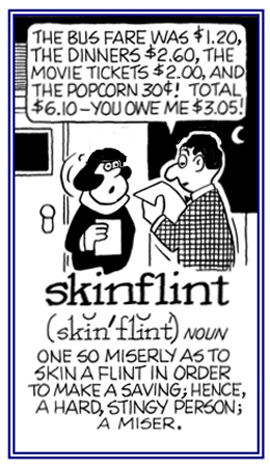 I chopped up more tarragon that was needed so decided to bung in a teaspoonful rather than 1/2 a teaspoon.  Actually I didn’t taste tarragon in the final dish so if you are a tarragon fan, I would say you could safely add even more. 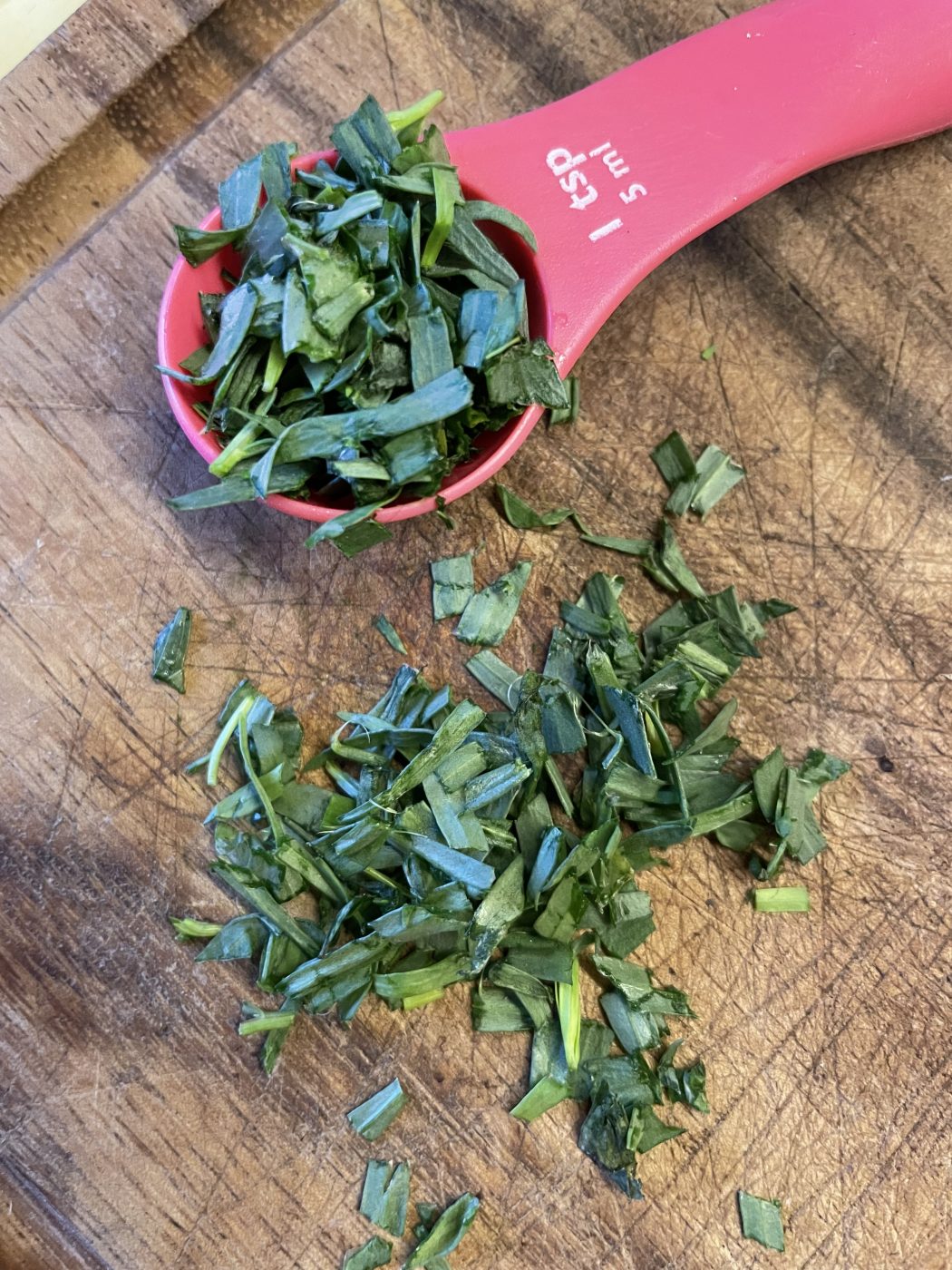 The sauce was really tasty but if I made this again, I might not add the flour.  It made for a thicker consistency, but I think it might be nicer without.  There’s not much of the sauce, so if you are serving 3 with this dish, or even eking it out for four (it is a whole chicken after all). you might want to make some extra gravy to serve on the side.  Mr R had a leg, I had a breast and we had half of the sauce each with some of Mr R’s perfect roast potatoes. 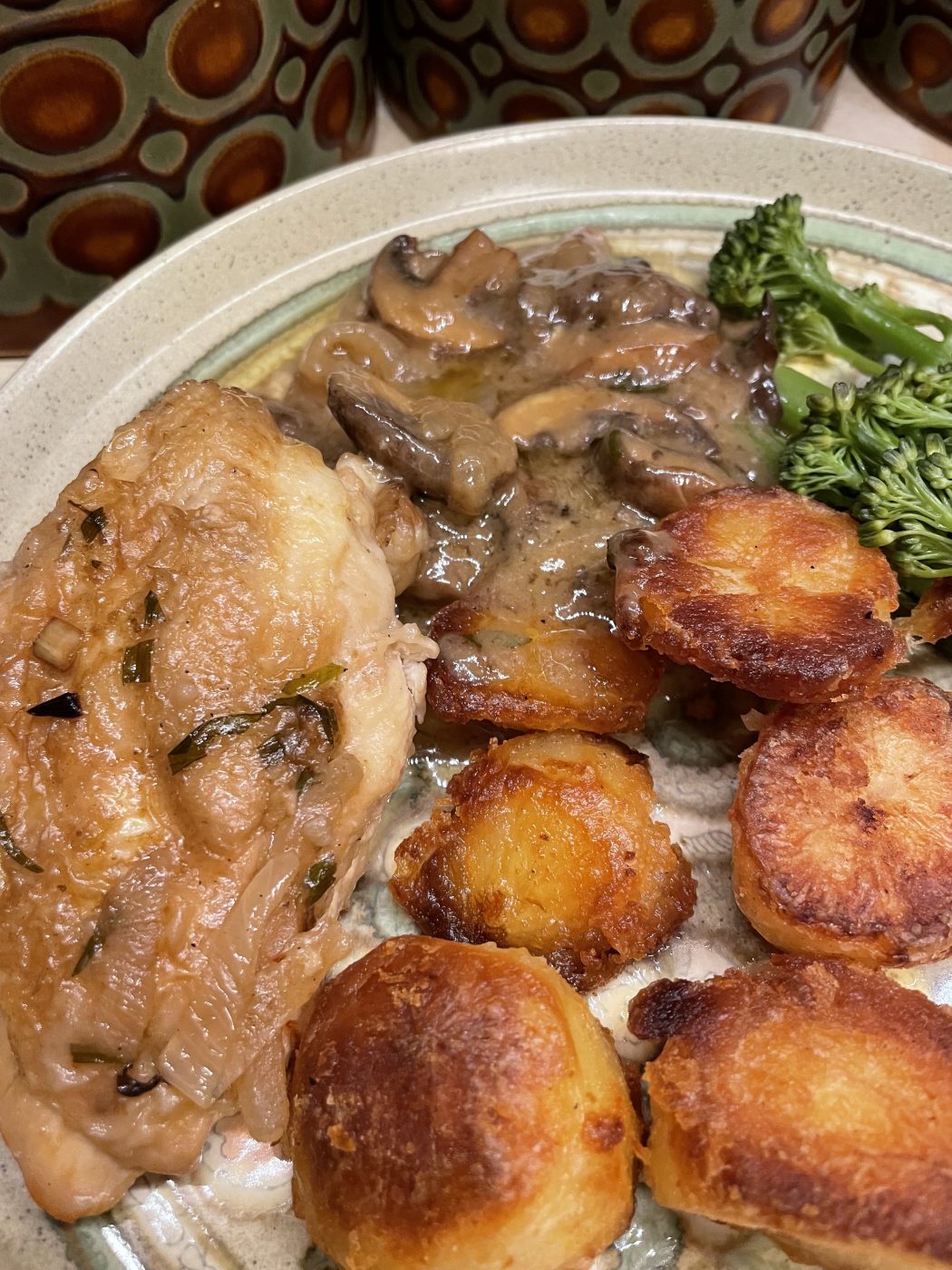 The Joan Crawford Pork Chops recipe that features Lawry’s Seasoned Salt can be found in my small but perfectly formed Cooking With Joan Crawford book.

I might actually haul my copy out and make those pork chops again. Lawrey’s here I come…