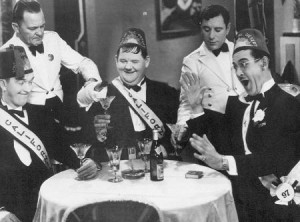 “We never see ourselves as others see us.”

After a week of insane bills being run up on ebay by my internet hacker I settled down to Oliver Hardy’s Spaghetti with Grace to try and forget about it all for a few minutes. We decided it was quite an apt dinner for such a bon viveur and found it easy to imagine Mr Hardy tucking a big white napkin into his bow tie to catch the spaghetti sauce splashes.

Charley was a bit peeved when I spoke to him on the phone and I revealed what I had been eating. I was supposed to cook this for HIM, as he is a Son of the Desert and all that. Well I’ll have another go sometime and he can try and educate me once more into why Laurel and Hardy make so many boys so very happy.

How many women are fans?