Good fodder!  You can’t go wrong with a Wiener Schnitzel can you?! 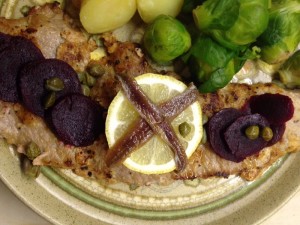 This was GOOD!  I liked the garnish of beetroot, capers, lemon and anchovies very much indeed.

I found an index card knocking around my flat the other day.  Written on it in a drunken scrawl was the following:

He was a bit wooden.  But she’s one of the greatest actresses that ever walked the earth.

I knew immediately who had said it (Mr Rathbone), but neither of us could remember who he was talking about.  In the end, by process of deduction, we worked out it was about Oskar Werner and Gena Rowlands.  They played a married couple in a fabulous Columbo episode called Playback. 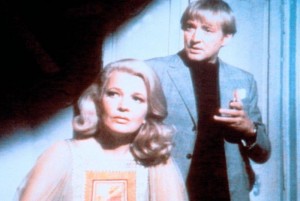 Oskar’s Weiner Schnitzel recipe is destined for the forthcoming Columbo Cookbook so I’m fiddling around with it.  If you would like it in the meantime, don’t hesitate to get in touch via the Contact Page.  I am hurtling towards having all the recipes test cooked, and getting fat into the bargain.  Shall I go on a diet once I’ve done them all?  I think I had better… 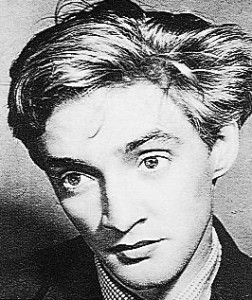 Oh, here’s something especially for Greg Swensen over at Recipes For Rebels and everyone else who either a) loves Bird’s Eye Potato Waffles or b) has no idea what they are…

This is by way of a thank-you to Greg for finding me the Oskar Werner recipe when he was on the “most wanted” list…  Watch out, this will definitely give you an ear worm…

Few drops of water (or milk)

3 tablespoons sweet / unsalted butter (or half butter, half bacon grease)

Note: You can ask your butcher to pound the veal slices thin.