Some nights you just need a steak and tonight was one of those nights.  Luckily due to the 3 yearly freezer amnesty, I happened to extract one yesterday and marinated it as per Paul’s instructions ready to grill when I got home from work – sooooo easy.  It was very nice, although I am still not much cop at cooking steak.  To be honest, I have no idea about it.  I need to get this book of my shelf and study it… 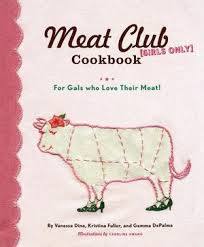 However, in my defence, and to make myself appear less of a kitchen failure, I finally came up with a plan for sorting out the freezer that I bought for myself as a Christmas present a couple of years ago. When I was a spinster singleton regularly test-cooking recipes for 4 or 6, I was always left with a tonne of leftovers.  I treated myself to an under the counter number with four big drawers and now there is all kinds of nonsense in there.  Almost all of it with no identifying labels. 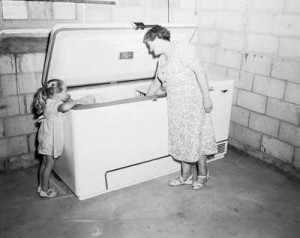 There are still some Roland Young Rissoles in drawer 3 that I suspect must date from 2011 as according to the blog, that’s the last time I made them.  I should chuck them away right?  Not according to my chums at the Guild of Food Writers.  I should test my powers of smell and sight.  I’m gonna defrost those rissoles soon and sniff them. 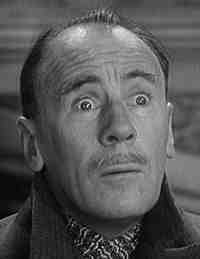 Yes Roland!  I will give them a chance.  Sniffing the Rissoles – good name for a food memoir?  Maybe.  Or an all girl garage band perhaps…. 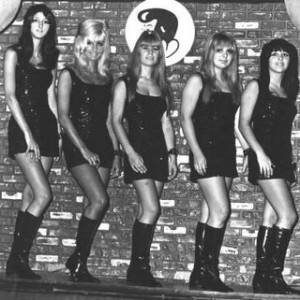 This week I proudly took a Tupperware container of soup that looked enough for two days worth of lunches to work.  I was feeling very smug about it all until I took off the lid and discovered it was Barbra Streisand’s Coffee Ice-Cream. 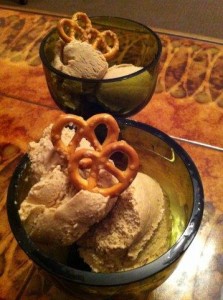 But no matter.  I found a nice steak in the freezer the other day and earmarked it for eating up.  I have instigated a “top drawer up” philosophy.  I shall eat everything in the top drawer until it is well and truly empty, then I move everything up from drawer 2 and do it all again.  I think there is some Janet Gaynor Ice Box Cookies dough in the top drawer and some half finished individual Richard Dix’s Egg Nog Pie De Luxes.  Ha ha.  What a crazy life!  Anyhow, the next thing due for using up is some of the chicken and mushroom sauce for a Vincent Price Harlequin Eggs dish on Sunday.  I shall make this for Mr R.  Ha ha – if you click on that Vincent Price Harlequin Eggs link you’ll get a chance to see me in a photo with Carol Channing – no kidding! 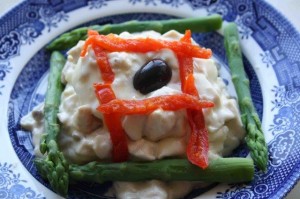 I am stupidly excited about my chum Caterina’s birthday party tomorrow night (she who is also known as Battenburg Belle).  For in a strange twist of fate me and my new man are both DJing.  I am playing the 1920s-1950s 78rpm shellac set on my gramophone, then he will take over with 1950s and 1960s vinyl.  That is pretty cool right?  I shall report back on who got most people dancing, and on whether he likes Vincent’s Harlequin Eggs.

Oh, and this Paul Newman recipe is the first of my sort-of-new-project.  Cooking a recipe from every book on my recipe shelf.  First row left to right, followed by back row left to right.  This will probably take me a couple of years – I have a LOT of cookbooks. 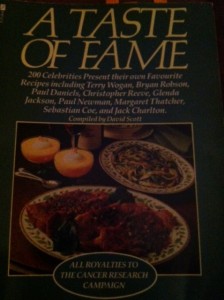 [yumprint-recipe id=’3′]I had some “Newman’s Own” dressing in my fridge which I think I bought because it was specified in some other film star recipe – possibly Shelley Winters’ Caesar Salad – so I used that for the marinade. 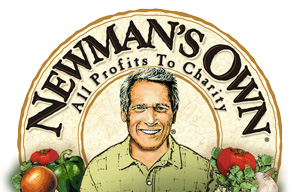 Appropriate I thought.  It was delicious too.  Thanks Paul.