I really love it when blog readers email out of the blue for a chit-chat so was thrilled to get a LONG email from Ellie from Devon about Pearl Bailey a couple of days ago.  It was Ellie who reminded me way back in 2016 that I had the Pearl Bailey cookbook, but had never dipped into it.  Now it is one of my very favourites.  Pearl is HILARIOUS.  Put this on your library wishlist, or get hold of a copy if you can.  It is laugh out loud funny. 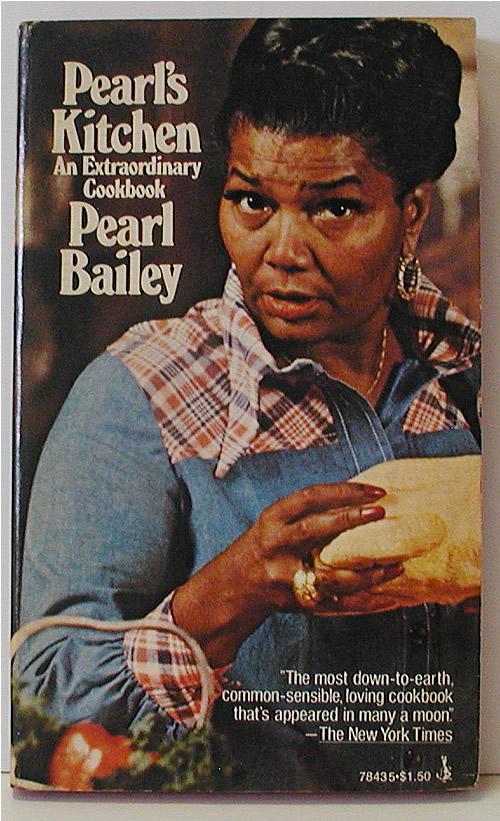 It would have been Pearl’s 100th birthday on March 29th and Ellie threw a little birthday party in her honour.  This is EXACTLY the kind of party I like, here’s a little bit of Ellie’s account of what she cooked from Pearl’s book.

“The Corn Fritters were ace served as little blini appetisers with onion relish. (I made too much batter and ate the remainder for breakfast this morning). The Hamburger Casserole Pearl is – unconventional – but again very tasty. The Corn Pudding was like the easiest – and one of the tastiest – cornbreads I’ve made (I’ll definitely do this again). Jean’s Broccoli was nice, but just garlicky broccoli. The White Potatoes How Do You Do This were nice too (I did the garlic olive oil variant). The Pecan Cookies came out well – quite short, and not as sweet as you might expect from the ingredients; a pretty classy sort of cookie. The final touch was the Potato Spice Cake (sprinkled with pearl sugar because it was apt, and because I can’t be bothered with icing). Mashed potato is a traditional component of feasts with this particular friend, but it was good to sneak it in in a different form! It’s an odd sort of flavour – chocolate fruit cake really – but we both enjoyed it. 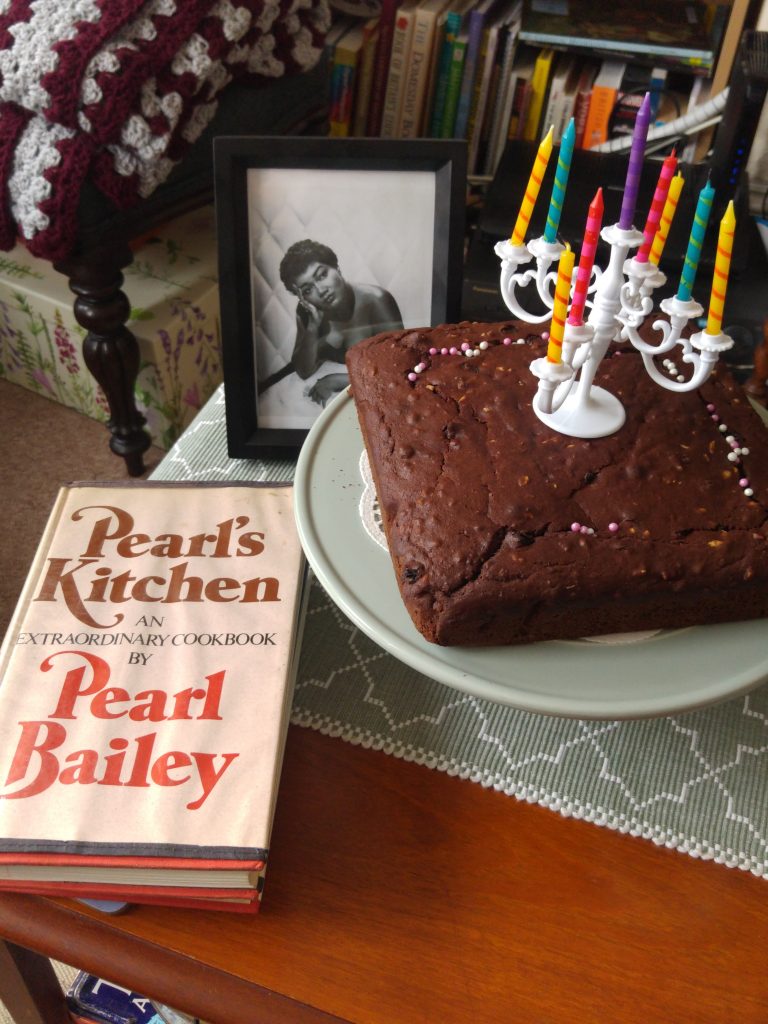 And will continue to do so for about a week. A healthy meal this was not, but hearty and full of heart, and I hope Pearl would approve.”

I am 100% sure that she would Ellie!  I am loving that mini candelabra – very Liberace! 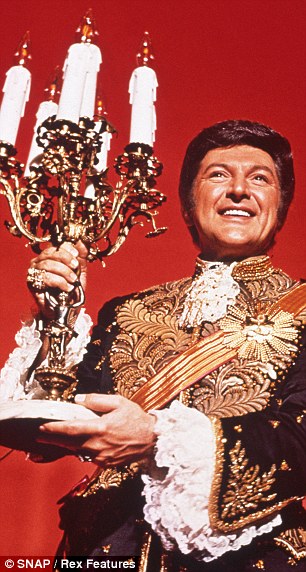 So Ellie has prompted me to get the Pearl Bailey cookbook out once again and I’ve been chuckling away at some of her asides.  I thought to give you a feel of her writing style, I’d transcribe the recipe for Corn Fritters exactly as she wrote it.  I thought these were yummy.  Pearl doesn’t mention seasoning (I think she assumes that readers would know to add salt & pepper) but I would recommend going quite heavy on the seasoning for these.  I added some red onion fried in butter, just because I had some around the place that needed using up.  Pearl is a kind of “chuck it all in” kind of cook so I’m sure she wouldn’t mind this addition. 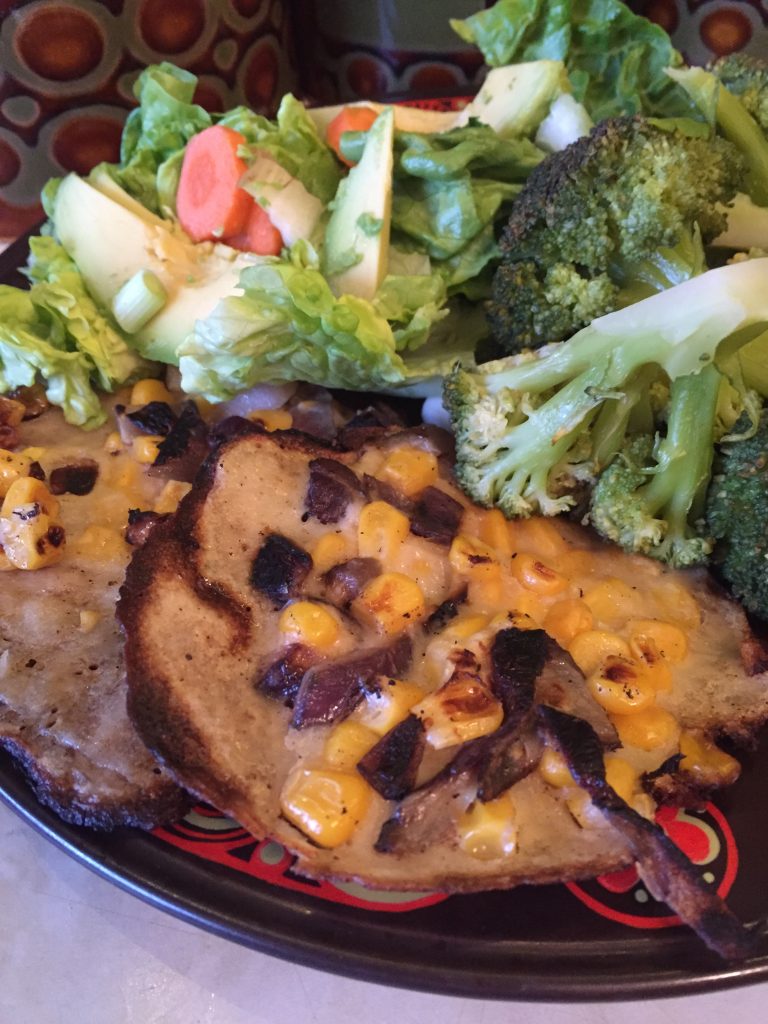 Thanks so much, Ellie for getting in touch and reminding me what a brilliant cookbook Pearl wrote.  I might disturb some fellow commuters again this week by reading through this cover to cover and laughing like a drain on the bus.

One night I had crocheted so much, I was cockeyed.  So I walked around a little bit and lay back on the sofa at the hotel where I was staying and I thought of corn fritters.  I thought, gee whizz, I slipped up, I don’t know when I have made corn fritters.  Then I remembered that Louis likes to eat raw corn; in fact, he likes corn any way at all.  So I knew he would like corn fritters.  Many is the time, while we’ve been driving along the road, my husband has pulled over to a fruit stand he has bought some apples and some corn.  Some people have given Louis the nickname “Apples” because he’s so fond of them.  Anyway, he would just shuck a piece of corn and eat it raw.

Corn fritters are divine for breakfast, dinner or anytime.  It’s particularly nice in the morning if you have say a little left-over corn cooked in the refrigerator.  Just mix up 1 or 2 cups of flour, 2 or 3 eggs, and about 3 cups of milk and toss in a couple of dabs of sugar and a pinch of baking powder.  You mix all of that up sort of like pancake mix, and add the corn.  How much corn you put in there is entirely up to you.  We generally like to put a lot of it.

Instead of fresh milk you can use diluted evaporated milk or even water if your pocketbook is a little tight.  After you have this batter all mixed, you grab a stick of butter.  Now the margarine people aren’t going to like this, but in my own recipes I don’t use the stuff.  I jumped straight from lard to butter, and never mind that yellow stuff in-between.  If you don’t have the butter, you can use bacon grease.  Put it maybe 1/8 or 1/4 of an inch deep in the bottom of the skillet and get it hot, but not so hot it starts to burn.  Then you take a big spoon and drop that pancake in there.  Just let it bubble away until it browns, then turn it over.  Try some syrup over them or apple butter – yummy.

I used 1 cup of flour, 2 eggs, 2 cups milk and about 500g sweet corn.  I don’t know WHAT I was thinking, as these fritters were just going to be for me, myself and I so I had loads of the mixture left over.  I decided to make a kind of corn pudding with the rest so I buttered up a lasagne dish, bunged the rest in and baked it for about 20 minutes at 175 degrees C.  If I’d had some cheese handy, I would have bunged some in.  I am having a slice of this for my din dins and am very much looking forward to it!

Oh, you might find that the first corn fritter you make is a bit naff.  Treat it in the way you would a first pancake, I believe in some quarters these are known as “The Dog’s Pancake”.  The first one never turns out right. 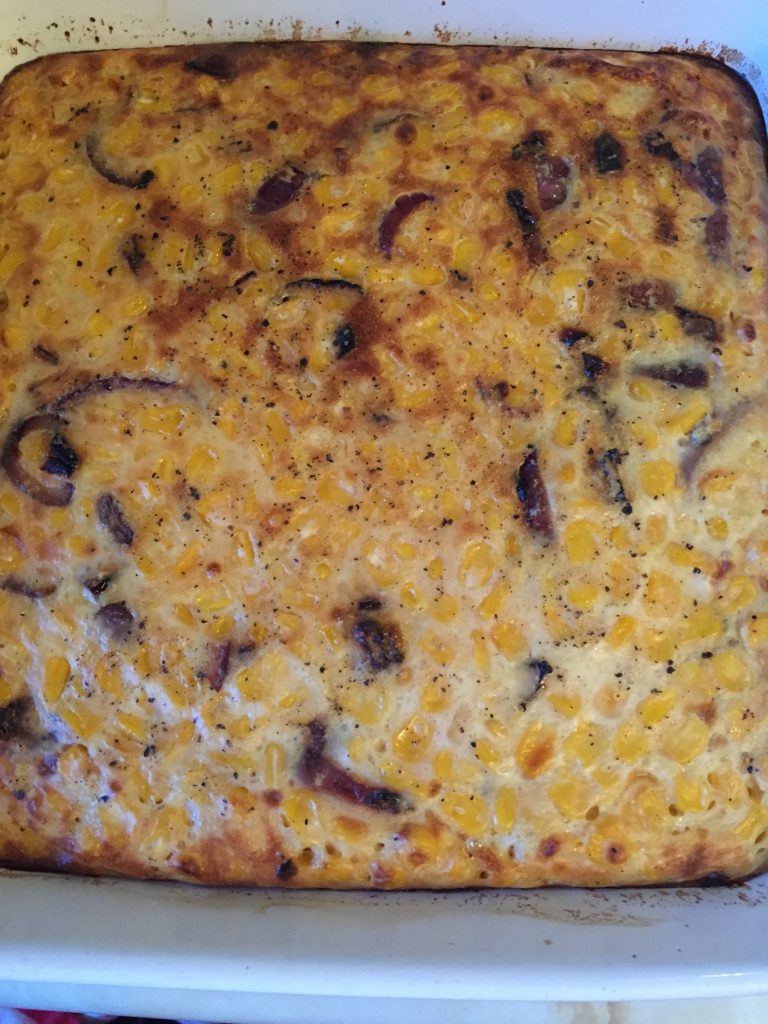