I love it when test cooks send photos of their dishes and ingredients they used, especially when they are not based in the UK.  I am always intrigued by how different things look in different places.  Plus, there are certain things that are nigh on impossible to get here, which are easy to get elsewhere.  In this instance, VINEGAR PEPPERS.  If anyone knows where I can get me some of these in good old Blighty, please – let – me – know. 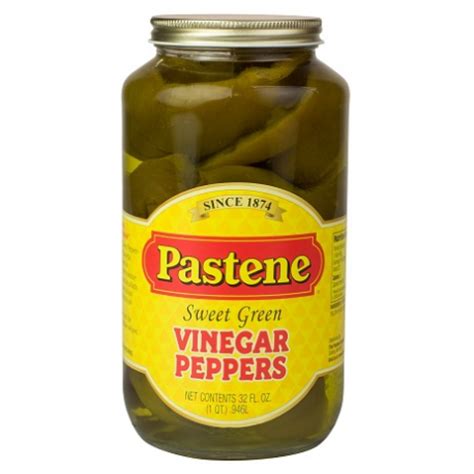 I had a devil of a job to find anything similar when I made Peter’s pork chops back in 2015 but I did get a little catchphrase out of it, “It’s not Italian” said with a shrug like this when I asked for them in an Italian deli. 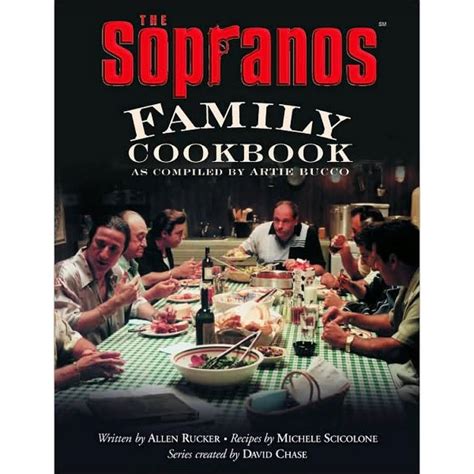 I thought it was quite plausible that vinegar peppers were Italian in origin.  But no, “It is not Italian”.  So, in the end, I used peppadew peppers which are the wrong colour but were absolutely delicious with the pork chops. 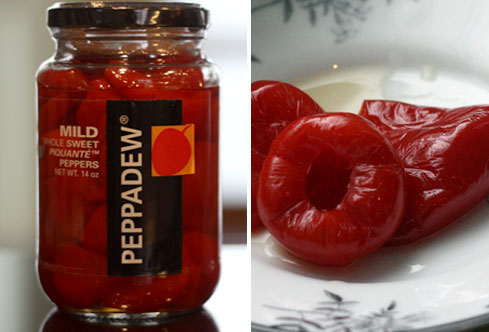 So there follows an excellent write up from Susan and Kent in McMinnville, Oregon in the US who made some modifications to the recipe.  Peter’s original is at the bottom of the post, but Susan and Kent’s tweaks are very good so it’s well worth reading through them if you are going to try Peter’s dish.
I met Susan in Austin, Texas and my abiding memory is of the amazing cupcakes she brought to Caroline Frick’s hen party – they were in SILVER cup cake cases, I had never seen such a thing!
Over to Susan…
a. We used less olive oil to saute the chops.
b. We used 1/2″ thick pork chops, so only baked the casserole for 15-20 minutes. Peter’s recipe comes from the days when everyone thought they’d get trichinosis from pork unless it was cooked to the consistency of leather.  The chops turned out moist and tender at this cooking time.
c. We used white vinegar, but apple cider might add a nice flavor.
d. We used Mazzetta Deli-Sliced Golden Greek Peperoncini. These are only slightly hot, a little sweet, and nice and vinegary. I noted on the recipe that we used almost a full cup, which added lots of flavor but didn’t overwhelm. 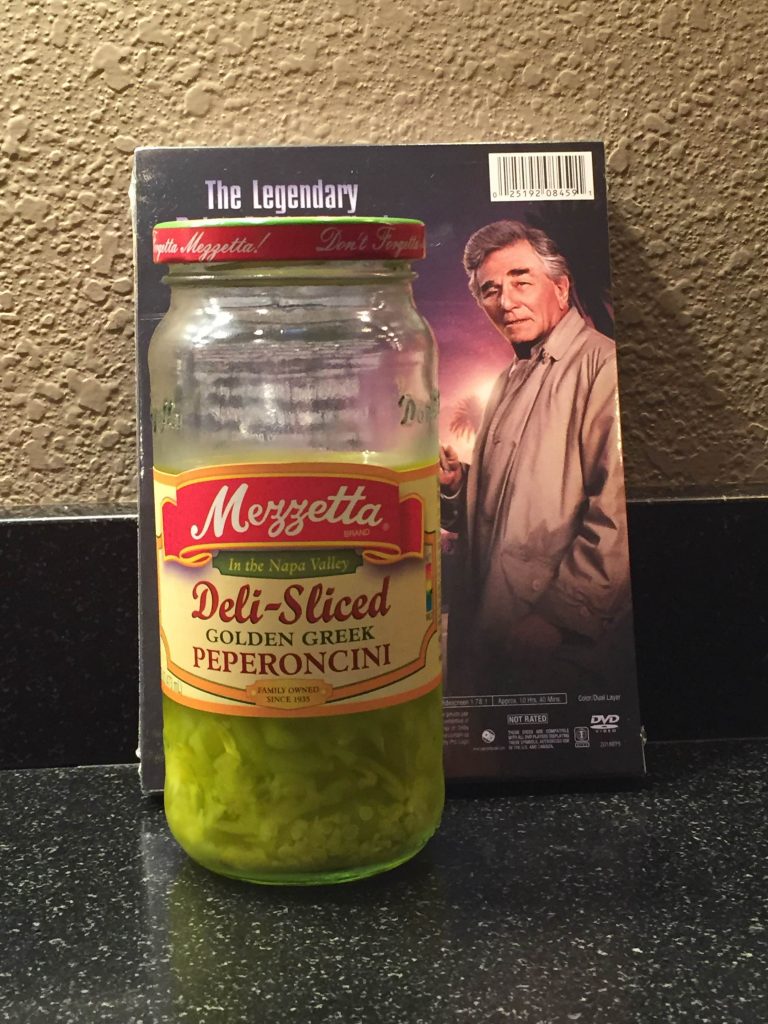 Changes in the method:
a. We browned the chops alone in the oil very quickly and removed them from the pan.
b. Then we added the chopped onions to the pan and cooked until golden brown. Then we deglazed the pan/onions with the vinegar, stirring until almost all the liquid was gone and brown bits were incorporated into the onions.
c.  Then we put the onion on top of the chops in the baking pan, poured the vinegar from the peppers jar around the edges, and added just enough water to come about halfway up the sides of the chops. Then we scattered the peppers on top.
d. As noted above, we baked for only about 20 minutes.
e. Due to this short baking time, we did not add potatoes to the chops. Instead, we made potatoes on the stove top, and stirred butter and chopped parsley in them before serving. They made a nice contrast to the vinegary sauce. 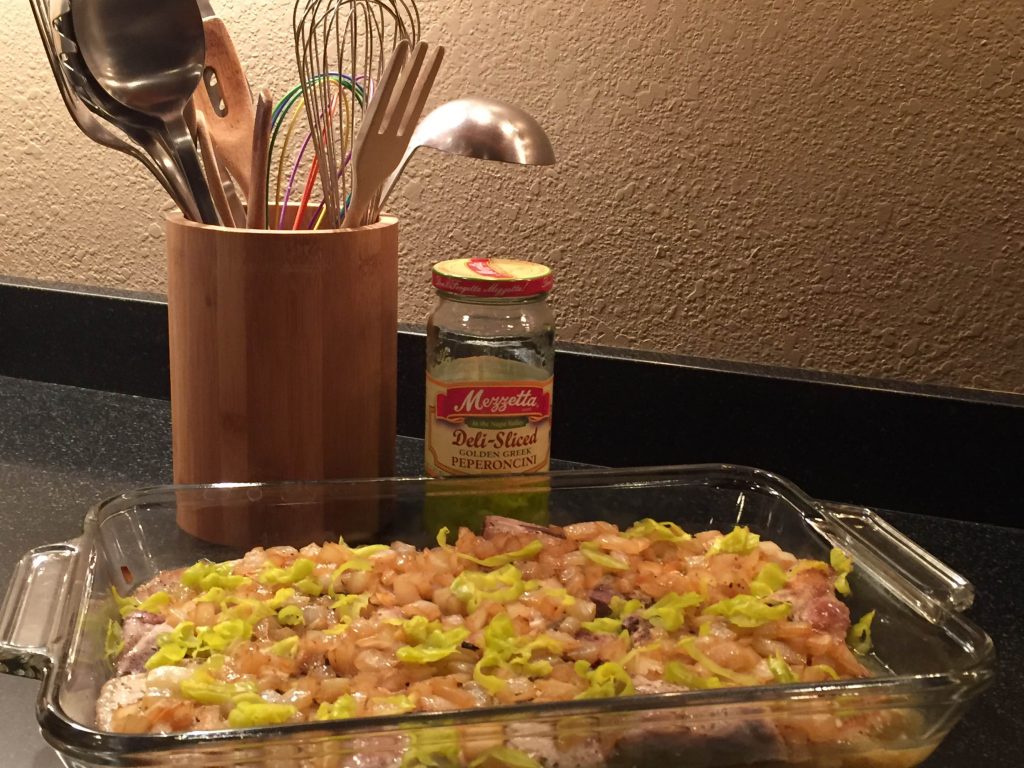 Kent says that these chops are even better the second day as “left-overs” – the flavors marinate overnight.
We enjoyed Robert Culp’s bravura performance in the Double Exposure episode.  The arrogant Dr. Keppel would surely have been condescending about this dish, which seems to come straight out of Columbo’s heritage of simple Italian-American fare.  We thought it was reminiscent of pork sausages cooked on the grill, surrounded by sliced onions, sweet peppers, and vinegar peppers, then served on a bun alongside an icy lager. 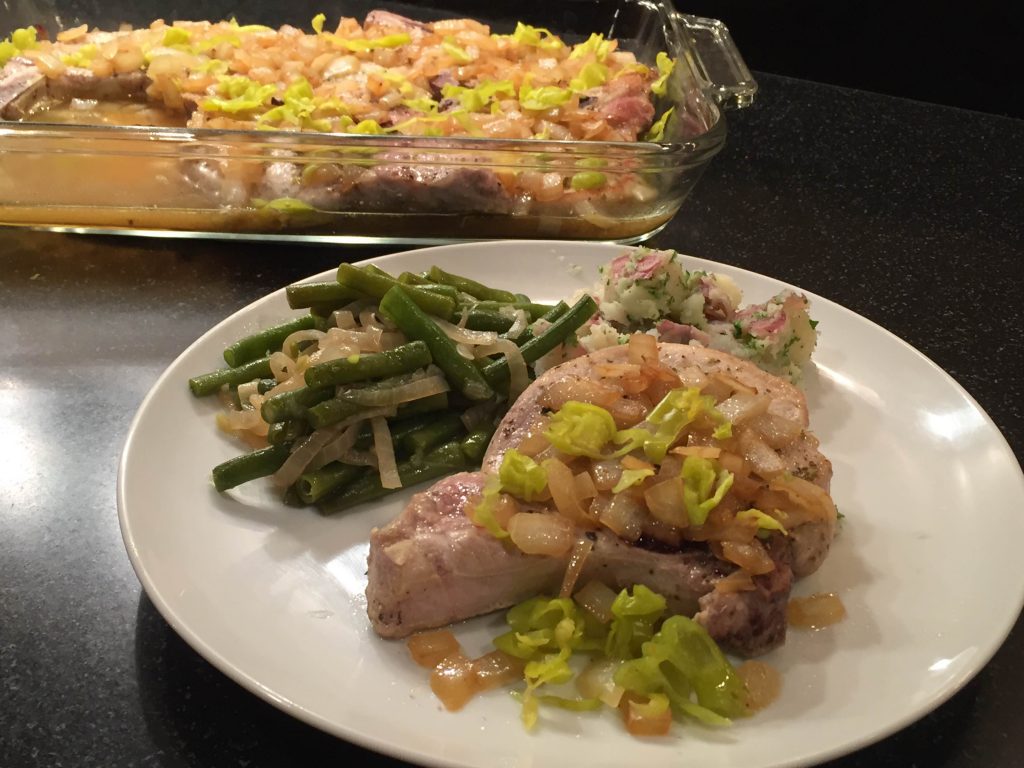 Thanks for testing this for the Cooking With Columbo book Susan and Kent! 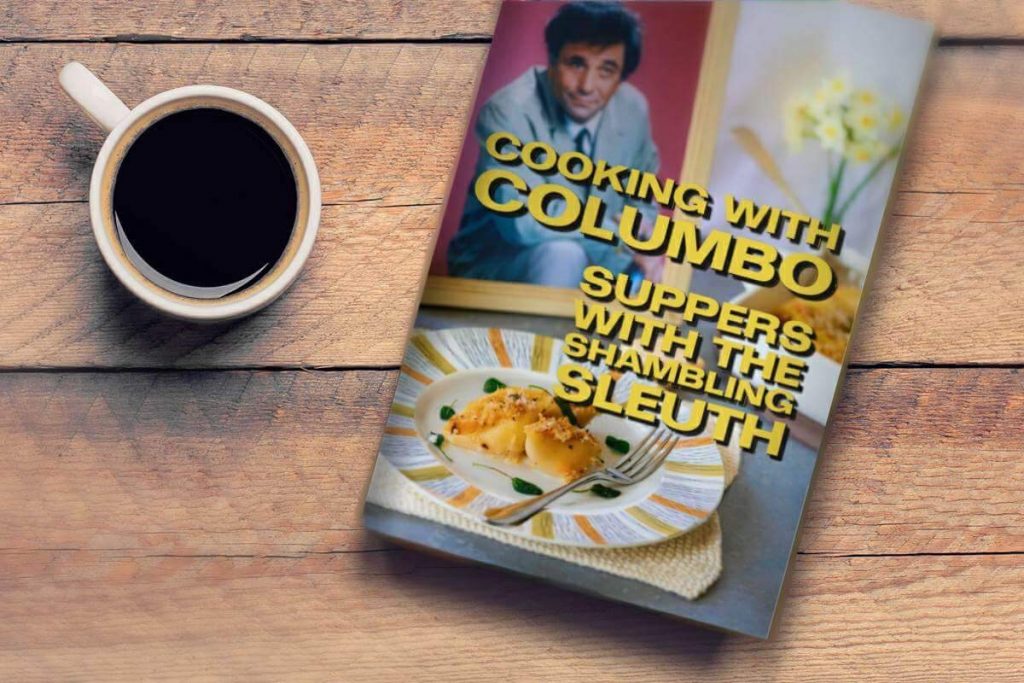 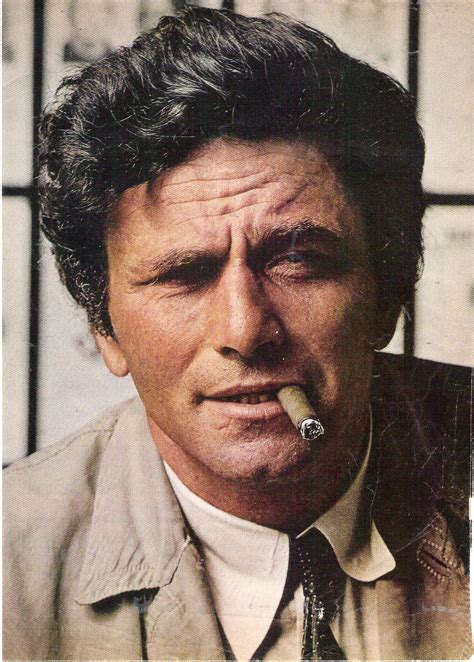 Heat oil in large frying pan and brown the pork chops with the onion.

Remove chops and place them in a heavy iron ovenware casserole dish. Add vinegar to frying pan, stir in all brown bits and add to the casserole dish. Add some cracked pepper, very little salt, and the thyme. Now add 1 cup / 240ml water and half a cup / 115ml of liquid from the vinegar peppers.

Bake for one and half hours. Add vinegar peppers.

Potatoes may be added if desired 1 hour before chops are finished. Cut potatoes in quarters for faster cooking.

Serves 3-6 depending on the size of your chops.

If you fancy seeing how to make another of Peter Falk’s favourite dishes, check out this little video I made about his Pumpkin Lasagne recipe.