When I am faced with shop full of 78rpms I always buy ones with funny titles like, “My Wife is on a Diet” or “Washing Dishes With My Sweetie” both of which turned out to be winners.  So it is with recipes.  Sometimes I just pick them because they sound cute.  Egg Nog Pie De Luxe is just such a fab name for a pud. 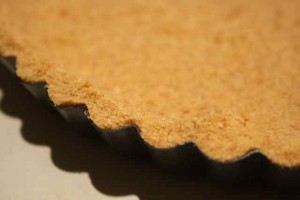 I was very, very pleased with my Graham Cracker crust, not least because I have never made such a thing before and it was delicious.  Also, because many moons ago I made the pilgrimage to Panzer’s in St John’s Wood to buy a box of Graham Crackers (for readers Stateside, they are rarer than hominy over here) and they have been unopened on my shelf ever since.  There is a price sticker on the box – £5.99 – which is almost 10 dollars.

Anyhow, Richard’s recipe made much more pie than I expected so I have some little ones in the freezer: 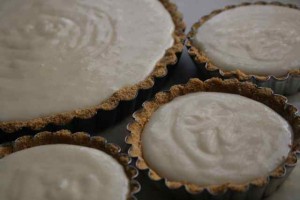 which is good because I have a MAN coming to dinner next Friday so dessert is almost ready.  All I need to do is bake 2 little ones and then bung some meringue on top.  When I was putting the meringue on I was thinking about my mum’s lemon meringue pie – I remember loving that and in my mind’s eye, the meringue was always in PEAKS on the top.  So here is my attempt at that… 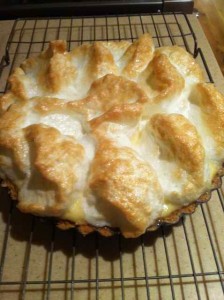 The flavour was GOOD (there was tablespoon of rum in the custard) but the custard was very runny.  I’m not going to transcribe the recipe because I think it needs an extra step.  I think the custard should be baked in the Graham Cracker crust and then baked again with the meringue on top.  I will experiment and when the recipe is right, I’ll post it.  There is a recipe for Constance Bennett’s Egg Nog Pie De Luxe knocking around the place somewhere so I’ll compare and contrast.

Right.  Got to bake the Janet Gaynor Ice Box Cookies and make some William Powell’s Vastrouskis for Hatty’s radio show.  I’m really looking forward to it.  Thanks Richard!  Don’t look so glum, your pie was yummy! 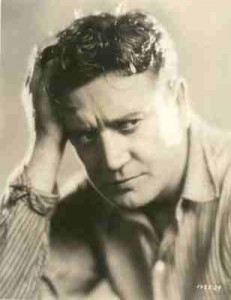