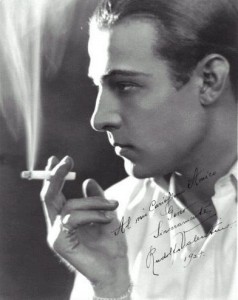 “To generalize on women is dangerous.
To specialize on them is infinitely worse.”
Back from the seaside after a week of intense recipe-wrangling. My mind is reeling with all kinds of nonsense – is a frying pan the same as a skillet? What English cheese would be roughly equivalent to Asederos – the Mexican cheese used in Lupe Velez’s Enchiladas? And of course the continuing conundrum of how much fat salt pork would Gary Cooper have been able to buy for 15 cents in 1936?

Returned to my new home in Battersea with renewed vigour for recipe testing. Planning to test every one of the metric-ified recipes in the next few months. I will be very fat indeed by Christmas. It’s definitely worth doing though, the very first test revealed that although there was flour in the recipe ingredients for Rudolph’s dish, I hadn’t specified when to add it. Rectified!

Sidney’s verdict? “Very succulent. The sauce was to die for…” Better to die of a delicious chicken sauce than a perforated ulcer and blood poisoning at 31 like Rudolph I would say.

Sidney’s local Somerfield supermarket is closing down in a couple of weeks, so the sherry for the sauce was HALF PRICE! So were many other things, so we had a bit of a spend up. The kitchen is full of booze, cleaning products and extra virgin olive oil…