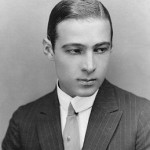 My friend Yadrian came to dinner last night.  I wanted to thank him for helping me select a DVD projector and we decided on La Dolce Vita to show it off.   I’ve never seen this film but Yadrian loves it.  I didn’t realise that he had studied film and philosophy at university, but it might explain why he is such a fan of Fellini….

After scoffing some William Powell Vatrouskis, a few Joan Crawford Salami Canapes and some Bing Crosby salsa with Tortilla Chips we had Rudy’s Spaghetti Sauce without “Secret” as Yadrian doesn’t eat fish.  I liked his top tip of snapping the spaghetti in half before cooking, I’d never thought of that!

Alas, after a humongous bowl of spaghetti and half a bottle of wine I was very sleepy and dropped off half way through the film so we are going to have another night together watching the rest.  I can’t believe that the second bottle of wine Y brought with him remained undrunk and I forgot all about the chocolate puddings!

I blame Anita Ekberg – what a woman!