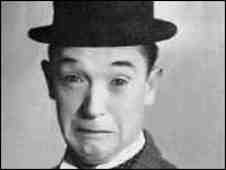 I felt a bit like this about Stan’s fish really.  I had purchased two nice shiny sea bass (from the fishmonger who didn’t know what a halibut was) and I stuffed them to Stan’s specifications and tied them up with string.  I baked them in the oven and they looked nice, but I think I should have used a different fishy – very bony.  And you know what George Formby would say don’t you?

I wish I could remember who did the Scottish version, “I Like Bananas Cos they Have Nae Any Bones…”

Anyhow, there are pix of the fishies on the Flickr site but I think the recipe needs some work.  Let me know if you fancy having a go as this one is slated for the book…
Ooh, along with my fish I made a version of Lauren Hairston’s Cabbage With Bacon – which was scrumptious – you can just see it in the picture.  I added some sweetcorn that I had knocking around and the taste combination was GOOD.